They say the waves will knock you over, the currents will kill you dead.

But this afternoon I’m picking up a kayak and putting it in the Mississippi River, there to cross wind, waves and shipping lanes from New Orleans to Algiers Point.

When I started my adventure over 1800 miles ago I vowed I would only advance myself using the power of my own body. That means paddle, pedal or walk. A bicycle took me this far but you can’t bike on water (not this far from my native Wisconsin).

And the thing is, the bridge here ain’t built for bikes.

That means there’s only one way across. And today’s the day. 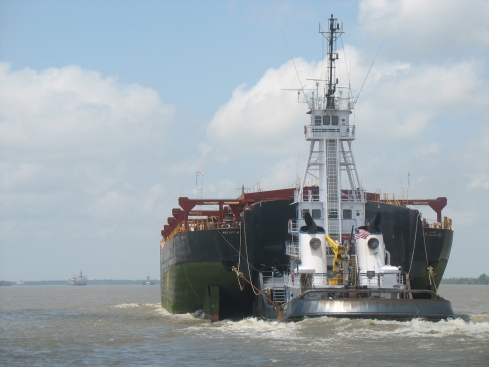 One of our neighbors on the crossing. Photo by Drew Jacob.

What About the Ferry?

There is a free ferry from Canal Street to Algiers, and I’ve taken ferries before.

But as I depart these sacred banks that logic’s feeling thin. I’m about to go 8,000 miles using my muscles; why skip the few thousand yards that lie before me? Can I really live with that when this is all a distant memory?

I have to cross the Mississippi River on my own power.

Today’s expedition would be impossible without the intrepid Jessica Broome. You might remember her as the wingwoman who put up with me on the road to Venice. She had never biked more than 10 miles at a go and suddenly she torpedoed 160 in just a couple days.

We’ve reserved a kayak for two.

(Once we get across, we’ll go to the Dry Dock Cafe where we had our first date; then back to the water for the return voyage.)

The thing is, Jessica has no idea just yet if she’ll actually be sitting in that second seat or not. Her kayak experience is limited, and the people of New Orleans are doing everything they can to scare us out of our plan. Some of the hazards (and solutions) include:

Don’t let my parentheticals fool you: I’m intimidated by the waves we might face, and the wind will make paddling hard. Jessica is going to make a spot decision whether she’s in that boat or not, and I’m just as happy to see her waiting for me on the far side (via car) as I am to have her as my co-pilot.

I’m used to people warning me I’m about to die. There’s something in human nature that makes us repeat these things. Only the worst stories are covered, only the tragedies stand out; the dangers then become our gospel.

When one woman who has never paddled told me I couldn’t make it by kayak, she didn’t have the slightest air of doubt: she was sure she was schooling me. How do you respond to repeated, exaggerated, and well-intentioned alarmism? 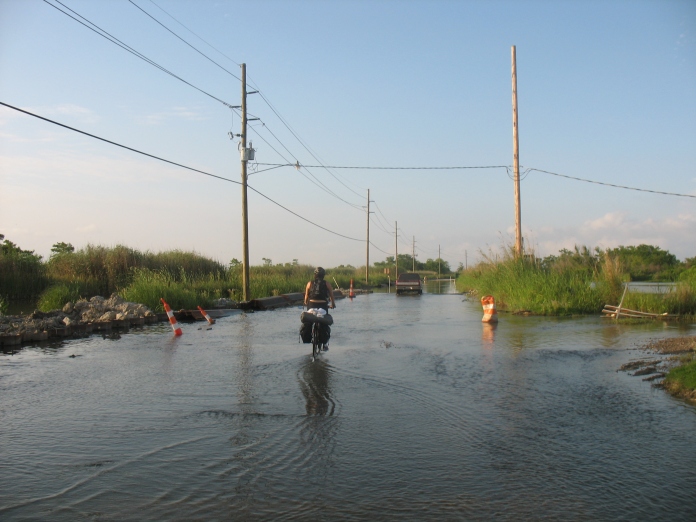 Biking on water. Once again Jessica proves me wrong.

I don’t actually get on my bike and leave New Orleans till Saturday. When I do, I will take the ferry across the river—because I’ll know I already crossed that segment on my own power. Saturday will be a day for a morning sendoff party, a bicycle parade to escort me to the ferry dock, and 60 miles of hot, humid wind in my face as I zoom toward the town of Houma.

For today, let’s hope the weather cooperates: Plan B is a midnight bike ride over a freeway bridge. I’d prefer the 40 foot waves.

5 thoughts on “Kayaking the Mississippi River at New Orleans”