Crossing a train bridge is worse than I thought.

It was sunset. I told my host in Beaumont, Texas that I’d arrive at 7:20 p.m. I know how to time these long biking days. I just had to cross the Neches River and I’d glide into town at dusk.

There was just one bridge to cross, the I-10 freeway bridge. I don’t mind taking a freeway bridge now and then. As I chugged up the ramp toward the bridge I could already see the tall buildings of downtown on the other side. It sure would feel good to eat and rest.

But there were two kids on the freeway.

When I say kids I mean teenagers. Maybe 19 tops. Both guys, and they were just sitting on the concrete barrier along the ramp. They had bikes with them, but not touring bikes, just around-town bikes with no real equipment or anything. I assumed they lived nearby. Maybe they came out here to smoke a joint.

I waved as I approached, intending to cruise past. But they wanted me to stop.

I looked at the bridge skeptically. The cars didn’t have a problem crossing.

“There’s no shoulder,” the kid explained. “You’ll get smooshed.” (He used the word smooshed.)

I almost chuckled. These kids… “no shoulder.” Obviously they hadn’t biked too many bridges.

“Do you mean there’s no shoulder or just a really narrow shoulder?”

“There’s nothing. We went all the way up as far as we could. It just disappears. If a semi comes along there’s nowhere to go and you’ll die.”

At this point I became aware that the other kid was talking on a cell phone to someone.

“….yeah, he’s been vomiting,” the kid was saying. “Blood? No, he hasn’t vomited any blood. He says he can barely breathe.”

The two exchanged a look like they were really pulling one over on somebody. I must have raised an eyebrow; the one without a phone leaned in confidentially.

“We’ve been here three hours,” he told me. “We’re getting a ride in an ambulance.” 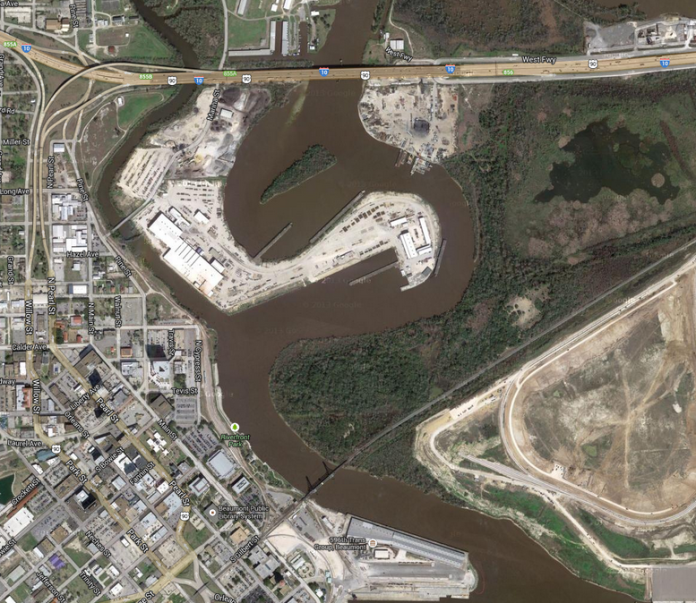 I raced up the bridge. I told him I was going to see for myself. I really just wanted to get out of there.

Instead of conning 911, I could’ve suggested a few other ideas:

Even if Beaumont was too small to have taxis, calling one all the way from the previous city would be cheaper than riding in an ambulance. Heck, even call for pizza delivery and bum a ride back. But maybe they thought ambulances were free. I know it shocked me the first time I found out they’re not. Seems kind of barbaric.

Still, they had already made the call and it was too late for any sage wisdom. I just wanted to check out the bridge, decide on a plan, and get away before the wagon came.

They were right about the shoulder, though. Smoosh city. As the sunset turned to dusk I backtracked off the ramp and I saw the red-blue lights of the ambulance rolling up to those kids. Buen suerte, aventureros.

“Good except half the I-10 bridge is missing and I can’t get across. I’m trying another route.”

“Other route? I don’t think there’s another way across unless you go substantially farther north.”

“Yeah, I noticed that. But I see there’s a train bridge near me. I’m going to have a look at it and see if I can cross it safely.”

“You know, I have a truck. I could just come get you.”

I had figured he’d offer that, bless his heart. But then I wouldn’t be powered by my own body. And tomorrow I’d have to find a way to get back over the bridge, right to where I left off. It’s hard to explain this to people.

“I appreciate it. But I like to be self-sufficient. Let me take a look at this bridge and I’ll call you if it’s not doable.”

The bridge where I made my stand.

“Taking a look” would’ve been hard even if it was still light out. I got to the train tracks but still had to follow them all the way to the shore of the river. Only then would I see if there was a walkway beside the tracks.

You can’t ride a touring bike on gravel or railroad ties, so it was slow trudging on bad footing. The tracks had bayou on either side and the mosquitoes were glad to host me. I became aware of a rail yard nearby, and based on all the noise it was an active one. I didn’t want to get in trouble so I turned off my lights and walked in the dark.

When I was far enough past it I turned the lights back on. I saw that I was just stepping past something yellow on the track.

Something yellow and coiled up.

The proverbial hackles went up as I leapt about four feet past it, almost losing the bike. It hadn’t rattled, so maybe it was asleep. The other rattlesnakes I saw—yes, the others—had all been cut in pieces by passing trains. But it’s hard to judge in dim LED, so I had to appraise every new band of fat yellow scales before I rolled over it.

This stretch went on. Once I had to drag the Giant off the tracks and wait on a steep bank of loose gravel while a train roared past. It was only a mile on the map, but getting near the bridge took me over an hour. By then I was committed to crossing (what were my other options?)—walkway or no walkway.

Well, the big moment arrived. The bridge was about 1,000 feet across and no walkway. No trains to be seen or heard. I made an offering and set out.

Ka-chunk, ka-chunk. The Giant’s wheels rolled from one tie to the next. There’s nothing but empty air between those ties, so you can easily slip through and break a leg. For a hundred seductive feet there was a plank down the middle to walk on, but that didn’t last. But it was peaceful out there.

Until the train horn.

I was exactly halfway across when it sounded. The same instant the headlight came into view up ahead. It was all too troped for a movie script but quite gripping when you’re eating it.

I went faster, ka-chunk-chunk, ka-chunk-chunk, but there’s just no way to run on that surface. When I reached more planks I tried to ride the Giant along them, but it seemed like a suicide move. People make bad decisions when they’re stressed and frayed. I reminded myself of that, breathed slower and took brisk, deliberate steps.

The horn blew again. Not a blast or a series but just continuous, endless horn blowing. The engineer could see me and he didn’t want me out there. Well, I didn’t want to be there.

The bridge was a lift bridge. At some point there’s an operator tower, and it has a tiny catwalk. I considered taking shelter there and waiting it out, but it would be a tight fit. The catwalk isn’t meant to accommodate a bicycle. The backup option was, of course, to take to the drink: throw in the bike, then jump off next to it. But this isn’t amateur night.

So I began a round of chicken with a speeding locomotive.

It was a 400 foot run. The train light blinded me. All I could hear was my heartbeat and the horn. The beast hadn’t reached the bridge just yet, and until it did I wasn’t dropping over the side. Tie by tie, I raced forward.

I hit the bank and scrambled off onto the gravel hooting some sort of parch-throated victory shout. I also got a better view of my adversary from the side: for the first time I could see that it was a good three minutes out from the bridge.

I leaned on the Giant and laughed.

The engineer stopped blowing his horn. A minute later I was on a regular city street, one more terrible idea checked off my to-do list. I set my wheel to the north, and considered stopping at the hospital.

I wanted to know if those kids ever dodged their ambulance bill.

12 thoughts on “You’ll get smooshed”