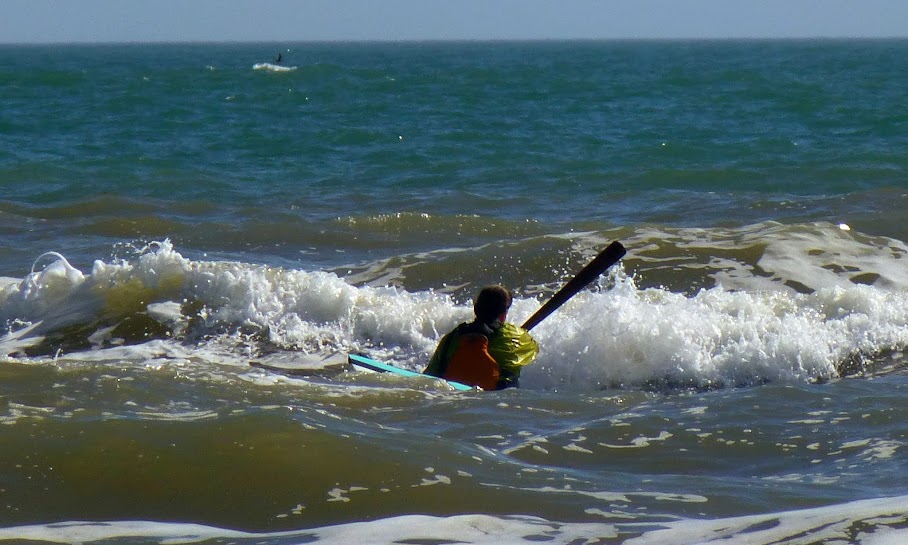 Me on the sea. Photo by Ken Johnson.

Even though I struggle with how to go forward, I still prepare for a lengthy sea voyage. That’s because I hope to kayak at least the 150 miles of coast between here and Mexico, even if I switch to other transportation at the border.

That 150 miles is challenging. It’ll be a week of 8+ hour paddling days. I will camp out, carry my own provisions and deal with wind and weather with no resupply points. Training has been intense.

Possibly the most important sea kayak skill is “the roll.” If you capsize in kayak, a true professional will simply twitch their body, flick their paddle and roll back upright again, ready to keep moving.

This is a life-saving skill. My mentor Ken had me read a collection of kayak disaster stories. Paddlers who got lost and blown off course, groups separated in high seas, and sudden storms that struck from a blue sky. The results were hypothermia, stranding and even death. As much as these accounts differed, they all had one thing in common: everyone would’ve been fine if they’d just stayed in their boat.

(Or they can’t do it under storm conditions.)

Rolling isn’t taught as a basic skill. I believe this is a problem. Kayaking 101 should be: how to paddle, how to turn, how to roll. It’s a more important safety precaution than even rescuing kayakers who end up in the water, because it can prevent that situation from happening.

But kayakers hate learning to roll. It’s not just intimidating (as all trained skills are for beginners), it involves the panic of drowning (strapped in a boat with your head underwater), disorientation (upside down), physical shock (you think that water is warm?) and discomfort (salt water sinuses every time). So it’s considered optional… until you get turned over in a storm.

This is where two nasty human habits come together: we avoid danger, and we like comfort. Staying comfortable can cost you your life.

After talking with instructors, I set a goal of 500 successful rolls before I strike out for a Gulf expedition. If I can do that many in practice, it’s likely I’ll roll instinctively if the sea demands it.

Me performing a kayak roll. Photo by Ken Johnson.

Recently I’ve pestered Ken to go out in the open Gulf of Mexico. Technically we’re in the Gulf every day, but a line of barrier islands shelter our coast. Conditions are much tougher beyond those islands.

So Ken indulged me. Last week we finally we got the right conditions: a warm, clear day with moderately strong winds. I opted to ride Ken’s Peforma kayak, his most stable wave-surfing boat (the fighter jets of the kayak world). We left in high spirits.

Here’s what I meant when I asked to go the Gulf: let’s paddle hard to cut through the surf, get out to the big gentle swells, and enjoy a day at sea. We’ll have to surf the waves back to shore when finished, a single pulse-pounding run.

Here’s what Ken meant: you’ll paddle hard to cut through the surf, you will immediately turn around and surf the waves back in, and after they have their way with you you will repeat it again, and again, and again.

On the way Ken confided that he had seen conflicting surf figures for the day. “One said waves up to 2.5 feet, the other said up to 4.5 feet.”

The reality was a blend of both, with rare waves hitting the 4+ foot category but few that were much smaller. Ken gave me advice, which he doesn’t always do.

“You need to keep paddling as hard as you can into every wave as we go out,” he said. “Unless it’s so big you don’t think you can take it.”

“Hold your paddle bow-to-stern and lean all the way forward. You’ll probably just cut right through it.”

So we went out.

The Cattle of the Lord Tethra

In a fit of beautiful ignorance, my first run out was cheerful and easy. I crashed over waves taller than my body, laughing as my bow stabbed walls of white water. We made it past the surf—that is, where the peaceful waves of the sea approach the shore and turn into white, ravenous monsters—and reached the calm swells beyond. I kept going.

Ken instructed me to turn around and surf back.

This unnerved me, but I didn’t have long to think. Facing back toward shore, the swells I thought of as peaceful suddenly turned angry. Each one threw the tail of my boat around from behind. I hadn’t even reached the surf and it was a struggle to keep my bearing, the waves launching me forward at great speed. There is no “off” button for this.

I slipped along the swells toward land. Ahead I saw the first white tips of cresting waves, and then I was in one, its bulk behind me and its foam gurgling to my flanks.

In Irish myth, waves are the cattle of the titan Tethra. I had entered a stampede.

I slammed my paddle in a poor man’s version of a “low brace,” literally leaning on the wall of water behind me to keep upright. My brace wobbled—I’m terrible at these—but it held and I stayed up. Firing ahead of the wave I emerged upright and I broke into adrenaline.

The next wave came for me. I rode it, and then the next one. It was one of my best surfing runs because I had no idea what I was facing. I reacted with novice bravery, and bounced from wave to wave.

Until I didn’t. Every wave wants to spin you to one side or the other. Once you’re sideways it just bowls you over, like wolves on a smaller dog. I corrected this the first few times, but less so coming out of each wave, ever more off-course.

WHAM! My brace slipped through or over or under a wave and I was underwater. I had the instinct to keep my paddle, but not the instinct to roll. I yanked the loop on my spray deck and ejected.

Coming up was a rush, but only for a second. This close to shore, in such “small” waves, ejecting is safe. I seized paddle and kayak-nose and walked into shore cold, sore and disoriented. 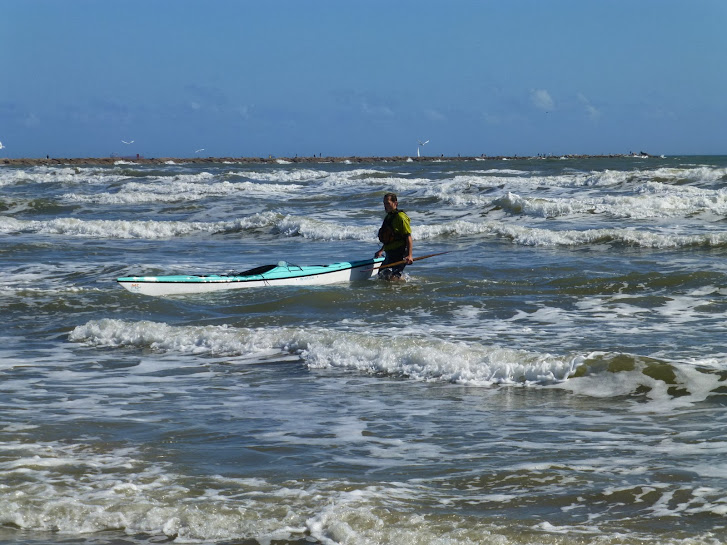 Ken surfed in behind me, neither disappointed nor surprised.

I didn’t feel like it, but that’s not the spirit. “Of course.”

It makes a lot more sense for Ken to stay where he can see me, and attempt assistance if needed. But it was still disconcerting. But how concerted are you supposed to feel on an Adventure?

The second run resembled the first, except I went under quicker. I strained like crazy to get out of my boat upside-down, and bashed my thigh as I ejected. It left a nasty bruise and a quivering soreness I can still feel.

On the third run I composed myself underwater, accepting that I would be there quite often. (“When you’re not falling in the water you’re not learning.”) In fact, I started to use my rolls.

Or tried to. In the washing machine, it takes a moment to recover your paddle, get it in position and start the roll. I did this, and with good form began to rise from the water—

—and took another wave slamming down onto my hull and face, forcing me back under.

I repeated this abortive maneuver on every run, sometimes getting a gulp of air and re-trying before ejecting. I never once made it upright.

Walking in from a close encounter in 50-degree water is fatiguing, so Ken and I had plenty of time to sit in the sun and rest between my attempts. He continued his advice.

“If you’re lifted up by a really big wave,” he explained, “You could see your bow disappear straight down into the water in front of you. If that happens, the nose could hit bottom and launch you end over end. That’ll break your back, or worse, my kayak.”

“Are these waves big enough?”

“Not nearly. But it’s good to know for the future.”

He told me how to get out of it unscathed, and I went out for another run.

Unknown to me, the waves had ripped my forward hatch open—just a hair. That was enough to partly flood it, a gradual process that I didn’t immediately notice. I could tell that I was surfing worse (less successes before wiping out) and that hauling the Performa ashore was harder than before. I attributed this to my spiraling exhaustion.

A flooded front compartment doesn’t just hurt your agility, it makes you nose-heavy. On surf run number nine or so, a four-footer picked up my tail for what I thought would be a great ride.

I watched in slowed-down fascination as the whole front of the kayak dug down into the water. It disappeared just like Ken said. That’s not supposed to happen, I thought, but I was already up at a 60-degree angle.

I leaned back as far as I could and rode it out.

These runs went on and on. Ken explained to me that it’s not because the waves were big or fast—these are puppies by Gulf standards—it’s because they were so damn close together. You could hardly come off of one before the next one just trampled you over. Often there was only time for a single paddle stroke between waves.

“So you go surfing in this stuff all the time?” I asked Ken.

One time I wiped out on the way out. Another time I braced on the wrong side, essentially volunteering to capsize. And in a black moment of underwater Zen, feeling at total peace and floating into kayak-roll position, the whole boat slammed so violently I swore we’d hit rock. It was the next wave chomping its hooves across my hull.

I made 12 runs. On the eleventh, shivering, worn, teeth clenched, head down, laughter over, paddle held true, I made it back to shore. I had surfed the whole fomorian minefield and reached the sandy shallows where cattle fear to tread.

In spite of myself, I grinned.

Part of me knew: end it here. End it on a high note. But high notes are contagious.

I turned back to the frothing monsters and paddled out to sea. My front compartment was full like a gas tank and I had no idea.

The first wave tore me apart. I almost lost my paddle (“$450 plus shipping,” Ken reminds). My right hand hit sand undersea, the left scraped along the cockpit coaming. When I surfaced I found I’d re-slammed my trembling, frozen thigh and blood was running down my thumb.

I did not walk my boat to shore. We drifted in.

I made offerings to the sea. I checked the equipment and bound my thumb with paper towel. I had trouble walking, standing up or taking my seat.

It was an excellent day.

Did you know you can kayak with Ken Johnson? He offers tours and instruction.