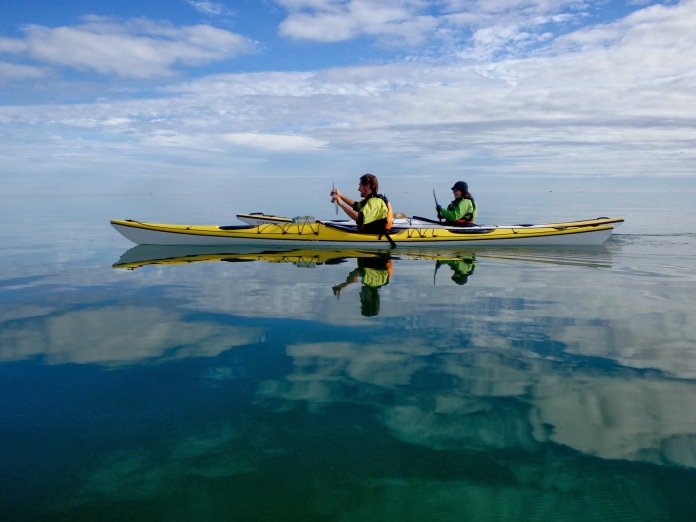 Kayaking with a friend. Photo by Ken Johnson.

One thing I’ve learned on my Adventure is the need to accept changes, to follow the wind. This entire excursion in Corpus Christi has been a lesson in patience, starting with unhappy times that forced me to question my journey. It followed an uncomfortably familiar arc: arrive at a new place with no friends but lots of high hopes, find all my plans difficult to implement, and grind to a frustrating halt—only to make friends and build a happy new life.

This is hard because, as my friend the Wandering Dragon points out, I like to be in control of my life. In fact, I like to be in control of things generally… which leads to a lot of tussling with the people I like the most. An iron stubbornness is a good quality when you’re forcing a plan to work against all odds, but it doesn’t make life easy. Over and over, I tend to choose the hardest way to do things.

Want to travel the world? Let’s do it all on body power.

Want to leave New Orleans? Fall in love there first.

You get the idea. I always have a vision for how I want things to go, and often I lay down a route to that vision that includes, well, challenges. Then I get frustrated when the plan derails. (Though I’m also relentless and patient in nudging it along till it finally works).

Recently I decided to try something different. My guiding principle for the last month has been, what’s least stressful?

So when my one-week return to New Orleans turned into two weeks, I just shrugged and enjoyed it. Sure, I needed to get back here to plan a kayak trip that was quickly falling apart. And I needed to vacate my rented room by the 1st, so the trip had to be planned by then… and I needed to reach Mexico by March 5th so another plan would work… but I just took it as it came. If I had to, I would cancel the kayak trip and do this leg by bike, which would be faster and take less preparation.

It wasn’t what I envisioned, but things had changed. Instead of agonizing over my damaged plans, I decided to enjoy the extra time with my friends and sweetheart. And I did.

I went with the wind.

And it turns out I had no reason to fret over the proposed kayaking trip. Sure, my paddling partner for the next 160 miles pulled out—but that means he’s offered me the use of his (far newer, higher performance) expedition kayak, the Epic 18. I get a free upgrade.

Meanwhile, since I’m going it alone I can choose my own route, and I get to take the sheltered, lonely, meditative Laguna Madre instead of battling down storms on the open Gulf. As Ken pointed out, between the boat and the route I’ve removed the two biggest risks from the whole plan.

Before I even got back to Corpus, my roommate texted me to say that I can stay a week into March rent-free. And my host in Mexico? Their schedule changed from “get here before March 5” to “get here March 8 or later.”

So here’s the plan for the foreseeable future: Monday morning I depart Corpus by kayak with a tail wind. I make my way along the Texas coast for four or five days, camping out at night. When I reach Port Isabel and the border, Ken meets me in a car. He takes the kayak and I get a bus ticket, heading onto Mexico.

This bus trip won’t erase any miles from my body-powered expedition—eventually I’ll be right back at the border, ready to walk or cycle—but it will serve as an advance scouting run, followed by a sabbatical to write, focus on my career, and master my Spanish. Those are the things that will help make the next leg less stressful.

At least, that’s my plan for now. But, you know… plans change.

12 thoughts on “Riding the wind from Texas to Mexico”