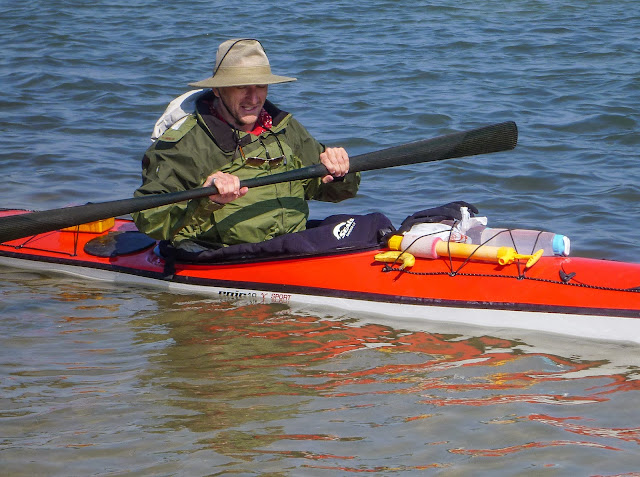 Me setting off. Photo by Winnie Shrum.

When I started my kayak trip I was nervous. I wasn’t scared for my safety; I had trained enough that I knew reasonably well I would get through the trip, with body and boat intact. But I expected it to be uncomfortable. I had gotten so used to discomfort on the last leg of my bicycle journey that I was sure my 100-mile paddle would be an act of endurance. And endurance, honestly, gets old.

But a day later than planned, over-bundled against the cold wind, from a pebbly little shallow, I resumed my Great Adventure where I last left it off, and I paddled away. Ken, my mentor, and our friend and fellow adventurer Winnie watched from the shore as I went around an island and out of their sight. From there I reached the Intracoastal Waterway, a shipping lane that follows the coast toward Mexico with a string of barrier islands to protect it from the open sea. This would be my trail.

Once in the deep water of the Intracoastal I heaved a bottle full of offerings over the side, singing songs to the spirits of the sea and of mariners. I waited for discomfort to set in, with a north wind helping to propel me along, but I never did get cold. In fact, It was a very pleasant day.

The houses of civilization disappeared, and marsh became my constant scenery. The shipping lane itself is deep and clear, but the land to either side is mostly shallows with mud flats and salt marshes beyond. At seventeen miles I saw the clear yellow humps of “The Dunes” on my left, a clear landmark and one of the only sandy landings along the way. It would have suited for a camping place,  but I pushed on.

Although I spent most of my kayak trip without any human contact—only a wave to the rare fishing boat speeding by—the Intracoastal is not a trackless frontier.  Little floating cottages bob on their moorings at regular intervals. Others perch on islands. Sometimes these are scattered out over miles, and other times they cluster together in such numbers that it looks like a little town on the water. But all these houses are empty; no one lives there, and those who own them come only a few weekends a year to fish. The result was a more potent beauty than any empty wilderness. Abandonment conjures ghosts.

It was on one of these floating ghost houses that I chose to make my first camp. As the sun fell low in the sky I pulled up to a yellow cottage and clambered out onto her front porch. It was my first time leaving the kayak all day, and my thighs were numb. They woke up readily enough and I lashed the kayak to a post before opening the hatches and slowly, but methodically, pulling out all of my supplies for the night.

Out came water jugs, foodstuffs, a stove, camping gear and warm clothing in drysacks. I stripped naked and changed clothing on the porch, in full view of a handful of other bobbing raft-houses and an island full of vacation cottages. There was no one to see me, not a light in any window on the whole bay.

The joy of these floating refuges is that they are moored to a single heavy pylon, and allowed to pivot on that point with the wind. The front porch, therefore, is always downwind. This was a godsend to your saddle sore rogue priest, who had lost the benefit of his tailwind and had felt the chill of a strong cross-wind from the east for the last three hours. On the porch of this little landing place I had a perfect wind shelter, and organized my gear before at last I hoisted the kayak herself up onto the deck.

I tied her in place, even though she was above the water level, having heard too many horror stories of waking up to a rogue wave stealing away one’s boat.

My cottage perched at the edge of Baffin Bay, facing west thanks to the east wind, and the sunset over the bay was spectacular. But I barely observed it: I rushed to erect a tent and square away all my things before the darkness came.

It was in those last minutes, when the sun’s golden face slipped out of sight and her pink blush was fading from a dark sky, that I felt despair in my heart. It was my only moment of low morale on the trip. Suddenly the air was cold, with or without wind shelter; suddenly the bay, which had seemed like such a calm and pleasant place to paddle in the afternoon, looked endless and untrustworthy. I became keenly aware not only of how isolated I was, but that if something was wrong—if my gear wasn’t enough to keep me warm through morning—there was no way to leave at night.

The temperatures were predicted in the low 40s, even the high 30s (European readers: that’s really effing cold.) I thought of chilly nights in my hammock when it was ten degrees warmer than that, and I cringed. I wished I had someone to talk to, to cheer me up. But that was not to be.

It’s funny how the human heart changes with comfort. Resigned to an unpleasant night, I started up my cook stove. The first bite of hot food lifted my spirits. Once I’d eaten a full meal I had almost recovered from my sudden despair. And then I looked up.

The moon grazed across the sky, both her horns up, setting slowly from the peak of the heavens to the edge of Baffin Bay. I always salute the moon when I see her, but I have rarely seen her in such queenly glory as this. The Texas sky, far from towns and light, and the silent rippling bay made the perfect dark mirror in which to scry her.

Still chilly, still sore, I was suddenly aware of the great beauty in every direction from me, and the incredible rareness of the scene. How many human beings will ever have a chance to do as I did, to paddle out onto the bay as silent as a gull, to camp alone on the deck of a forgotten house, and to watch the heavens put on their display with not a single soul to share it with?

When I crawled into the tent that night, I discovered it was warm and luxurious. I didn’t even use all the blankets. Waves lapped beneath me and, sometimes, a bird would cry out. Wrapped in a borrowed sleeping bag I fell into peaceful dreams. In the morning I would move slowly: there was no better berth in the world.

Me on the first night. Photo by André.

There’s more to tell about the kayak trip, and I’ll tell it soon. What do you want to know?

14 thoughts on “Adventure, the Texas Sea and Ghosts”