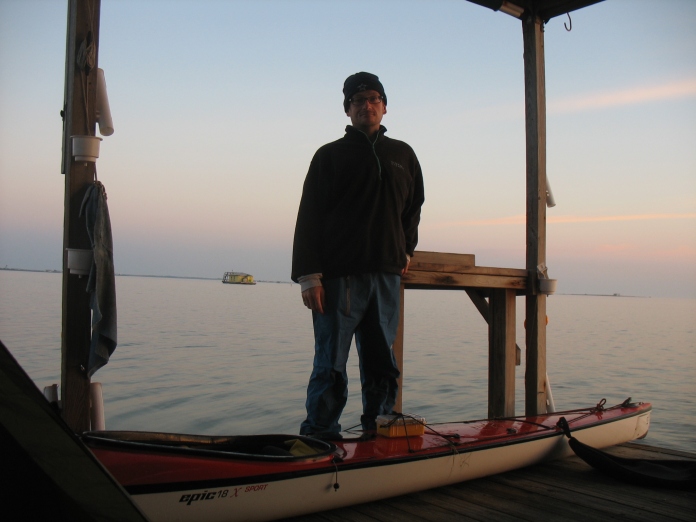 Me the first morning. Photo by André.

I awoke on my floating house at dawn. The wind had come round to the southeast, and the whole house had rotated—my view of the bay was different. Before I left Ken had joked, “Make sure you mark which way you were going each night, before you go to sleep.” Right.

The sun told me which way was which, and I had a borrowed GPS that I sort of knew how to use. I fiddled with it over breakfast while the sun rose in the east, her morning beams cutting onto the porch until I pulled off layers of nighttime clothing. I quickly applied sun screen and went back to eating.

It was a restless morning, the kind I’m used to from my bicycle trip, where I’d be up far too early but still not depart until far too late. Breaking down an entire camp, plus breakfast, cleanup, brushing teeth, changing clothes, loading the boat (or bike), and checking conditions/route is all too much for one person to do quickly, at least without making mistakes. I take my time, but the anxiousness of a late start always unsettles me.

(One crucial morning task is putting in my contact lenses with no mirror, a skill I had long drilled for exactly these conditions.)

By the time I cast off the sun was well up and the wind had intensified from the southeast, slowing my progress south. The GPS had confirmed that I was too wishful in my mileage reckoning—I had only gone 30 miles the day before, and I was destined to make only 20 more today. But I had high spirits and a great deal of excitement over another day of paddling.

Crossing Baffin Bay is beautiful, island homes and clusters of floating cottages on the approach, then an expanse of blue water too wide to see across. I aimed at the occasional markers of the Intracoastal Waterway, designed to guide large ships that weren’t there. Reliably enough they led me to sight of shore across the bay. Then came hours following a coastline of desolate ranch. With the wind ever shoving me back I spent the better part of the day in a slow, exhausting fight.

I pointed at the entrance to the next section of the Intracoastal: a narrow canal-like passage known as the Land Cut. Nature made this area a shallow, sandy marsh that vessels cannot pass, but engineers of the twentieth century cut their own channel right through. The result is a highway-like waterway, with cabins and mud banks to either side, deep enough that freight vessels can sail it—though with little room to spare.

Entering this channel brought me through a tight cluster of little fishing cabins, some rising on stilts directly out of the water. It looked like a village from some adventure game, a haven for pirates or frontiersman, and perhaps the den of a trader who sells rare goods to passing explorers. But the whole place was deserted, not even vending beer, fuel or bait to those few souls who might bother to fish the Land Cut. No worry; I had everything I needed aboard my little boat.

I will admit that this strange maritime environment triggered my oldest love of adventure, which is wrapped up tightly with imagination and fantasy. Normally, real life adventure is quite different than fiction, but I couldn’t help but see parallels between my actual surroundings that day and one of my favorite video games, The Legend of Zelda: The Wind Waker. Sure, my boat requires muscle to pilot, and I can’t change the wind with a simple song, but I was out on the water discovering one island or floating house after the next, each one begging to be explored, each one different in its own way. I doubt I would have found a basement full of vampires, or a crumbling wall concealing treasure, but the magic of discovery and exploration was very real to me that day.

And so the spell of adventure renewed its hold over my mind. The last 700 miles of bicycling had become a slog, and I viewed it more as an act of jaw-gritting endurance than a fun adventure. I started questioning my purpose during those months. Adventure will certainly always be physically demanding, but that doesn’t mean it need be miserable, at least not outside of rare unexpected challenges. But my bicycle ride had become miserable, and it was the days that were pleasant and easy that were rare. I wasn’t sure I wanted to keep on.

The kayak trip repaired all that. By the second day, I knew that I was warm enough even in the coldest weather I’d experience, that I could rely on my camp gear and sleep cozy, restorative sleep in my tent. All the things I had feared would make this leg a slog were non-issues. Sure, I was fighting for every yard of sea I covered against the wind, but that’s just hard work—like going to the gym. Hard work during the day is not really that challenging if you’re warm, dry and well fed at night.

My mind roamed as the beauty of nature intensified. I composed essays, I outlined books. I whispered ideas to herons. The cottages rose with the waves where they were built on rafts, and slumped and leaned where they were built on stilts. I was alone in a desert place, facing difficulty but overcoming it well. That is everything I want in adventure.

If I had one disappointment it was my slow progress. For the second day in the row I’d cover less ground than planned, but by evening it didn’t bother me much. I could keep going as many days as I needed, I thought.

I did have to keep a good eye for a camp site. There was always another cottage on the horizon, but not just any would do; to camp in the fierce wind, I really wanted a good wind block against both the south and east side. The Texas coast is stubbornly flat, and the cottages provide the only wind breaks—but since most here were on stilts, even they offered little protection.

An hour before sunset, I decided to explore a side-channel that extends off the main Land Cut, connecting it to a sandy gulf. As a sort of maritime crossroads, it had at least a dozen large cottages lined along its shores (all empty).

Paddling directly into the wind, I fought hard to ply the little channel. I inspected each house as I went by, to no avail. Only on the way back—leaning back on my boat, paddle out of the water, letting the wind and current send me along—only then did I notice a hidden feature on one large house.

There among its stilts was a wall. A windbreak. Facing exactly the direction I needed.

I put ashore, walking my kayak though mud and marsh grass. The site was perfect. There was a lower deck with a fish-gutting station walled on three sides against the wind. That was where I’d put my tent.

I had to use a maneuver I call the “mud hustle.” You walk your boat through the shallow mud as close to land as it will go, then unload some supplies (carrying it overmud to shore). This lightens the boat, allowing you to drag it further. Repeat, repeat, repeat.

The sun was down long before I finished making camp.

Even then, the closest point of dry land I could get the kayak to was hundreds of feet from the house. After I finished dinner I had to carry all my water and food overland to the kayak, and secure it inside so no animals could get it. Fun fact: a thirsty raccoon in a salt marsh will chew right through your water jug to drink what’s inside.

I received some alarming texts about weather from Ken, about which I could do little.

When at last I put my head down in my tent, I hadn’t even turned off the light before chattering, scurrying large rodents descended from the palm trees and canvassed my campsite. They had smelled my dinner, and went right to the spot where the stove was—but they found nothing.

Silently, I reached one hand out from the tent and grabbed my only unsecured water bottle, bringing it inside to spend the night with me.

I slept well, planning to wake as early as 4 a.m. to get a head start against another fierce headwind. I thought that if I paddled hard all day I could reach Port Mansfield, the only resupply point on my planned route and a good place to wait out a storm.

You can read the earlier part of this adventure here.

The conclusion is here.

11 thoughts on “The Rats Didn’t Bother Me”