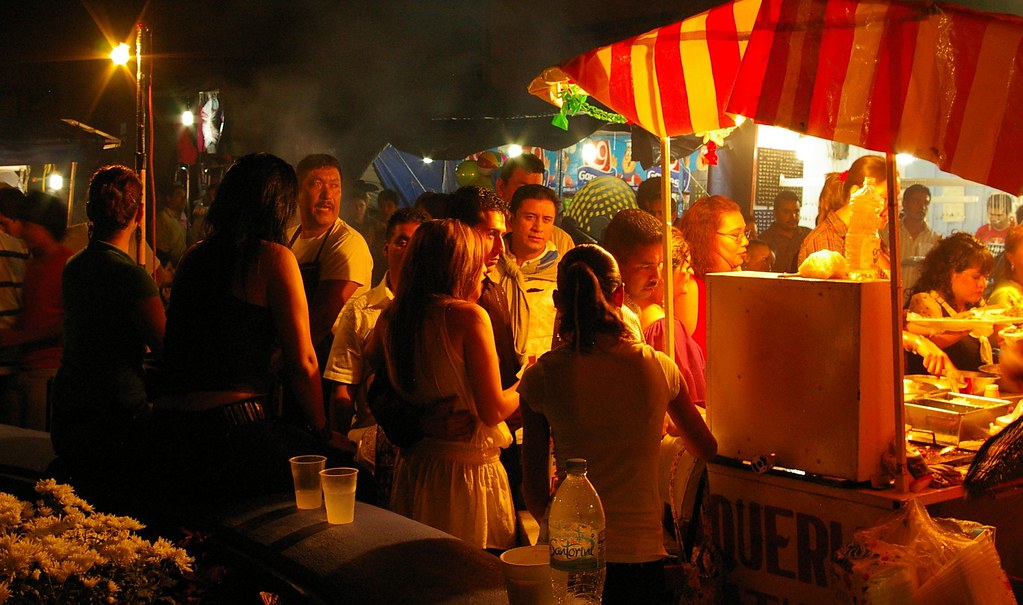 Last week I gave a tour of Guanajuato as I’ve experienced it, and I devoted part of that post to my quest for good local tacos. One reader said my description made her doubt her longstanding aversion to tacos. That surprised me, because I can’t imagine having an aversion to tacos. But I sometimes forget that Americans eat tacos that are definitely not tacos by Mexican standards. And I think that’s a shame because it means people are missing out on a lot of amazing meals. So this week I’m taking it upon myself to be your taco ambassador. With pictures!

First let me describe what counted as “tacos” when I was a kid. Growing up white in Wisconsin, we stayed pretty close to baked chicken or baked pork chops or an occasional oven broiled steak. I don’t remember even having Chinese food till I was nine or so. So you can imagine that our tacos, when we had them, were far from adventurous.

But I also think many readers will find them familiar. My mom would start by putting ground hamburger meat into a big pan. As it cooked she mixed a packet of store-bought taco seasoning into it. (Actually, for all I know you mix the meat and seasoning first; I’ve never had the dubious distinction of authoring a batch of these tacos.) While that was browning up she would chop a head of lettuce, dice a few tomatoes, and if things were getting crazy maybe even dice an onion. When all this was done we’d shove it in into bright yellow “crispy” tortillas. I don’t think we even knew the word tortilla, we just said taco shells. The taco shells had been deep fried weeks before in a factory, and as I recall the packaging went to some lengths to make sure they weren’t all smashed to bits. Over these little Frito pockets we would shake shredded cheddar cheese, drizzle some jarred salsa and maybe even blob a little sour cream. Voila! C’est le tacos.

(Eventually, as I grew older, we had to have a fight in the store over where to get Mild or Medium salsa. Living on the edge.) 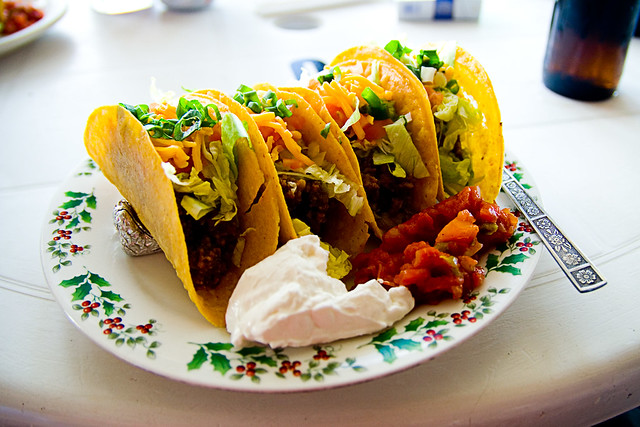 Pretty fly, for a white guy. Photo by Kevin033.

Now I want to be clear: there’s nothing wrong with these tacos. In fact, they’re really good. Like really good… for junk food. I’ve been to bars where their happy hour included these tacos and I wanted to kiss someone (I probably did). If someone says we’re getting together Friday night for movies, beer and this kind of tacos—I’m there. Kids really like them, too. (Although I was weird in that respect. I think I may have thrown a fit when taco night rolled around, or just made one or two small ones and gotten the heck out of there. But that’s not because these tacos are bad, it’s because I was a picky eater. Like a really picky eater. Like I should be dead or diabetic by now.)

So these tacos are great, except for one thing: they’re not tacos. Or at least, they wouldn’t be recognized as tacos in the home country of tacos. They have nothing in common. There’s also little variation. Anglo Americans sometimes prefer “soft” tacos, which is getting closer to real tacos in theory except now we’re using flour tortillas (???) instead of corn. In fact, as far as I can tell guerros (that’s you, fair-skinned English-speaking people) will choose flour tortillas over corn tortillas any chance they can get. So let’s look at how Mexican tacos are different.

Basically every ingredient in Mexican tacos is different. For example:

So imagine strips of fresh grilled steak spritzed in lime juice on a taco like the one above. Or pork meat with a tangy marinade spit-roasted and shaved off paper thin seconds before it falls on your taco. Or ground Spanish sausage, or… well, I’ll spare you. The point isn’t just that it’s amazing, it’s that it’s a totally different meal than Anglo tacos.

The salsa is also different. You have everything from heaps of diced tomatoes to bland red salsa to piquant red salsa to smoky chipotle to burn-your-mouth-green-salsa (the green is usually hottest). Every taco stand has at least three different kinds, often house specialties that they take pride in. Sometimes there’s guacamole too. That’s the great thing about legit tacos: you basically build them yourself. You can load them up, try new combinations and make it as spicy or not spicy as you want. I want to repeat that: Mexican tacos are not spicy. You make them as spicy as you want. (Usually.) 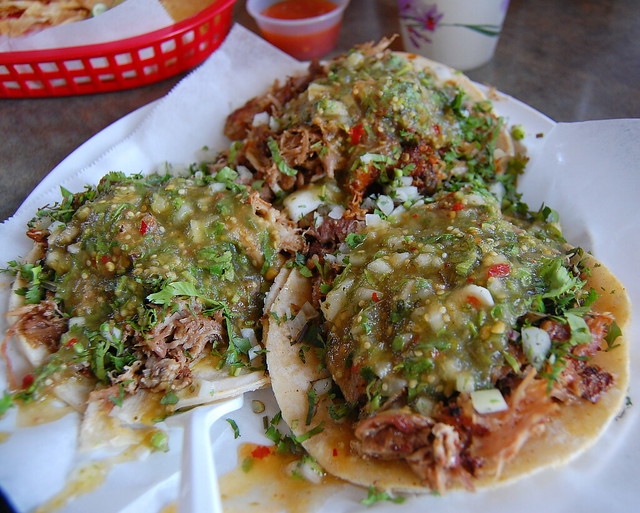 Where Can You Find These Tacos in the US or Canada?

If you’re asking this question I assume you’re not Latino. That means you have a problem: no one wants to sell you these tacos. These tacos do exist in the United States, all over the place. Some of the best tacos I’ve ever had were in a small town in Illinois; runner up was South Dakota. But the problem is that the restaurants that make them are 100% sure you as an English speaker do not want them. Even if you ask for real Mexican tacos they still assume you want the fake ones because they’ve had people say “give me the real thing” when they actually meant “give me what I’m already used to but tell me it’s the real thing.” They’ve probably had real Mexican tacos sent back because “you forgot the cheese” or “this isn’t what I ordered.” That person got you off the taco list. Sadly, like Cain’s children, sometimes we must pay for other people’s sins.

But with some finagling you can get these tacos. For starters go to a Mexican restaurant run by a Mexican family, not a chain restaurant (the word taquería is a good sign). Pluses if mostly Mexican Americans eat there and the staff have to fetch a brother or sister who speaks English to take your order. Second, you’re going have to describe what you want. Sometimes it’ll be on the menu as tacos mexicanos (or I’ve seen it as chivatacos in Texas) but more likely you’ll have to explain. “Tacos like they do in Mexico… with cilantro and onion, no cheese.” Maybe learn those words in Spanish before you go. If it’s slow they might be excited that a gringo wants real tacos. They might start to like you. If it’s busy they may not pay you much attention so confirm you’re really getting what you asked for. And make a point of asking for corn tortillas, because they’re really really sure you want flour ones.

(Do squeeze some of those limes on there, though, and add some salsa. Otherwise you’ll be coming to me complaining that “there was no flavor.”)

Some advantages of this kind of taco:

Mexico City burritos made by Don Quique, a great cook and a total bastard. Photo by André.

A Genus Not a Species

The other cool thing about tacos in Mexico is that it’s not really just a single dish. There are hundreds of types of tacos. And while the word usually means the thing I described above, “taco” is family of foods, with all kinds of strange taco relatives hanging out together:

The list goes on. In Spanish any of those could simply be called a taco in context, and it makes perfect sense. (Some of those do use flour tortillas, by the way.)

Now one thing I have to give to the United States is we really improved the burrito. The California burrito beats the pants off the Mexican burrito and anyone who says different is on the pixie dust. Don’t get me wrong, Mexican burritos are delicious. But that thing the size of a chair leg stuffed with rice, beans, guacamole, meat and sauce? That’s 100% Yoo-nited States engineering right there. Take that, Hitler! Still, despite that one victory, we pretty much massacre tacos. Some of my Mexican friends are under the impression that to an American, “tacos” are what Taco Bell serves. And the worst part is I have to tell them that, in many cases, that is what Americans think. And that makes me die inside. So if you get a chance get out there and try some real tacos.

Got a question on food in Mexico? I’ll do my best to answer. Leave me a comment!

110 thoughts on “How Are Authentic Mexican Tacos Different from American Tacos?”