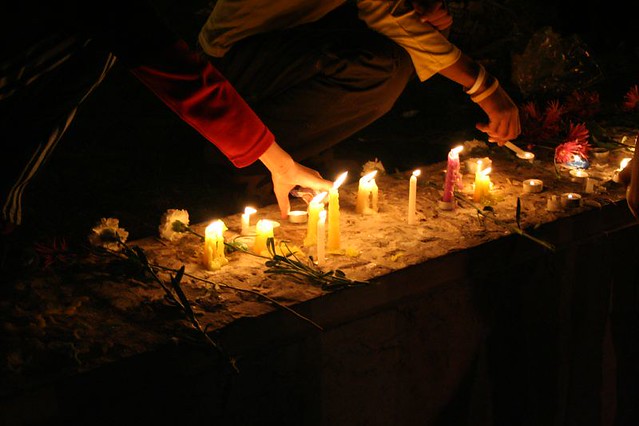 Yesterday I spotlighted Roger Griffin’s theory that mass shooters—like the one at Isla Vista last week—delude themselves into believing they’re heroes.

That leaves some uncomfortable questions for those of us who believe in heroism.

According to hero researchers, cultivating a “heroic imagination” is a good thing. People who can imagine themselves in a heroic role, and who picture themselves helping others in an emergency, are more likely to do so in real life. This is so central to the psychology of heroism that Dr. Philip Zimbardo has built his entire heroism program around it. If you can get people to think of themselves as heroes, they’ll start to act like heroes.

That doesn’t seem to sit well next to the diagnosis that Griffin gives the Isla Vista shooter, Elliot Rodger. Rodger felt lonely and powerless and came up with fantasies of how he could teach the world a lesson. In one dramatic act, he hoped to both prove how powerful he was and serve “justice” to all womankind. It’s like a twisted version of of a Hollywood underdog tale, and Rodger was sure he was the hero.

So is this a case of the heroic imagination gone awry? Does envisioning yourself as a hero lead to rash and violent acts?

I don’t think there’s any reason to believe it does. I’m going to suggest that the positive “heroic imagination” and Rodger’s delusion of heroism—let’s call it a “hero fantasy”—may both touch on hero myth in their own ways, but they represent two very different psychological forces.

I’m not saying Griffin is wrong. From Rodger’s manifesto, the delusions of heroism are clear. He believed he stood for something and that his revenge served a greater purpose. That is disturbing in the extreme, and it’s a perversion of heroism.

But I think there’s a real difference between that and someone who envisions themselves standing up for others, then goes on to create positive change. It’s not just two different outcomes from the same fantasy, as if heroic imagination were a coin toss. A healthy heroic imagination has a completely different framework.

Let’s start by looking at how heroic imagination and hero fantasy each work. Even on paper they don’t look much alike.

When we talk about heroic imagination, we can mean several things. We may mean watching a hero movie and picturing yourself as the main character. We may mean taking that experience and contemplating how it templates onto your real life—do you have what it takes to act the way your heroes act? Or we may mean reacting to news stories about disasters by thinking through what you would do if you were there.

But a deluded individual with a hero fantasy tries to make the world fit them. The whole framework is reversed. Elliot Rodger wanted to be a ladies man and be respected for it. When women rejected him, he didn’t engage in any serious reflection on how he could be a better man. Instead he imagined a world where everyone knew just what a real man he is.

These two approaches have different outcomes. Heroic imagination is a process of introspection, of seeking to improve oneself in response to challenges. That leads to being better equipped for future challenges. It’s a mental preparation of how you’d handle stress, danger or crisis. Thus, it creates someone who is more aware of their own abilities and the needs of those around them. That’s someone you want around in an emergency.

But hero fantasy has the opposite effect. It makes the individual less and less equipped for navigating the real world. They can’t deal with challenges realistically because every time something is hard it’s unfair and they demand the world change for them. But the world doesn’t work that way. So at best you have an individual who’s doomed to a difficult and unhappy life, and in some cases you get an Elliot Rodger who attempts dramatic, desperate action—and fails at even that.

The chilling coda of hero fantasy is that the great, dramatic action doesn’t even work. It’s as ineffective as everything else the deluded person has done, because it’s still based on an unrealistic understanding of the world. Elliot Rodger succeeded at his plan, but he will never be with a woman again. No one respects him as a true man; no one thinks we underestimated him; at best we pity him. And he didn’t even send the strong message to womankind that he hoped to send. In fact, his spree caused a rallying of feminists against his very worldview.

So Elliot Rodger didn’t get what he wanted. And people who suffer from a deluded hero fantasy never will, because delusions make poor foundations for creating change.

Tellingly, fanatics go out and try to create a heroic encounter. But people with heroic imagination—who are actually better equipped if there is such an encounter—don’t seek out those dramatic moments.

That’s the fundamental difference between heroic imagination, which produces capable, stable individuals, and a hero fantasy that creates killers. One is reflective and the other is narcissistic.

But that’s all inside the person’s head. How can we tell the difference? When someone pictures themselves as a hero, how do we know if they’re healthy or dangerous?

Look For the Signs

I believe an individual with a heroic imagination comes across very differently from someone with delusions. The difference is going to be pretty clear in their behavior and the way they talk about themselves.

One of the first things I learned about heroism is that there is no nice, tidy victory like in the movies. It would be nice if, for example, completing my Journey would inspire millions of people to head off on soul-seeking journeys of their own. But that’s not the way the world works. What I can hope for is that a small number of people might join me here and there, while a few others go on journeys of their own, and still others read my work and embark on other kinds of projects, that don’t involve a journey at all.

Someone with a heroic imagination may start off with grand plans but they learn to accept the limits of the real world. That doesn’t mean they give up, it just means they accept that it takes a lot of continuous, long term, hard work to make even a small lasting change.

A hero fantasy doesn’t accept these limits. Elliot Rodger believed that his one act could have world-changing repercussions. One spree in one city would send a message heard round the world. He didn’t see a need for years of hard work, messaging and campaigning to spread his (awful) message. He was fed up and chose to act, and oddly he thought that one act would be a big success.

This same delusion also means hero fanatics tend to work alone. People with a healthy heroic imagination reach out to others and try to build cooperation. Let’s say you have strongly held convictions about the environment (which I do). Heroic imagination leads you to try to prepare for and react to the many challenges involved in cleaning up the earth. You realize quickly that you’ll make a lot more progress with a coalition or group and you can see that others are already doing good work and might make good allies. Thus the heroic imagination leads you to form organizations and to talk openly and clearly about your goals with others. As a bonus, since your goals aren’t based on delusions, people tend to agree with you and it’s not painfully hard to get allies.

Someone with a hero fantasy cannot get allies, or not more than a handful of extremists. That’s because none of the above applies to them. They have an inflated sense of their own importance and they believe, wrongly, that a single dramatic act can make a lasting change. If a fanatic like this has strongly held environmental views, they might bomb a power plant but they’re unlikely to have the patience—or the social skills—to sit through meetings, find common ground and make compromises. Again, their goals and beliefs are based on a fantasy, not reality, and their own sense of importance is exaggerated; they cannot respond meaningfully to the needs or concerns of others. So even if they saw the value in compromise it’s unlikely they could offer a good one.

Thus, the two different internalizations of heroic myth result in two very different portraits: one of a realist who puts in hard work and considers themselves a small part of a bigger shift, and the other of a narcissist who can’t work with others even toward a common goal.

A final striking difference between the two approaches is the downside of each. Both heroic imagination and hero fantasy can go wrong, but they go wrong in amazingly different ways.

The biggest risk of heroic imagination—and I warn against this a lot—is when it becomes a pat on the back to reassure us we’re already heroic. In “hero” programs based on Joseph Campbell and in any public discourse about heroism, you start to get people saying we’re all heroes. Teachers are heroes for teaching, doctors are heroes for doing their jobs, moms and dads are heroes for raising their kids. When we take heroic imagination too far, it stops encouraging us to reach for a higher ideal and make changes. Instead it starts to reassure us that we’re doing plenty already, and no change is needed. When heroic imagination goes wrong the outcome is confident mediocrity.

But when hero fantasy goes wrong it turns deadly. It’s the idea that one person can solve the world’s problems by imposing their will on others. Like an action movie hero, there is no problem that enough bullets can’t solve. The fanatic gets so focused on their perceived role as a crusader, a rebel, or a savior (and above all as a victim) that they lose sight of the moral context in which their frustration takes place. The lives of other people don’t matter as long as they get to make a point.

So a proper, healthy heroic imagination and a narcissistic hero fantasy can both go wrong. But the worst outcome of heroic imagination is settling for average. That’s frustrating, because ideally heroism would inspire us to be or do more, not just hand out attaboys. But it doesn’t kill anyone.

On a final note, I want to point out that I haven’t focused on violence versus nonviolence. So often when we talk about heroism we discuss kids stopping bullying or bystanders saving a life in a subway. Those are peaceful examples. But a healthy heroic imagination is not necessarily strictly nonviolent: there may be times when doing the right thing really does require taking up arms, like in a struggle for independence. But the heroic imagination, as a force for realistic action, also reminds us that violence is far more likely to fail than to succeed. And that a lone individual imposing their will on others is never heroic.

There are many of us today who still believe in heroism, and we want to learn how to live up to the heroic ideal. The good news for all of us is that our heroic imagination is a positive thing. But some people, committing horrible acts, will appeal to the same hero myths and ideals that we do. That’s why I think it’s crucial to recognize delusion for what it is—and most importantly, never tolerate those who pretend it’s heroism.

Individuals who have high ideals but dramatic, unrealistic plans are not heroes. Ideals only matter when you live them, really.

7 thoughts on “Is There a Difference Between Heroic Imagination and Delusion?”