So far almost everything I’ve written about Guanajuato, Mexico has been positive. But that was on days when it wasn’t raining. If I had known what it’s like when it rains, what I wrote would have been five hundred times more positive.

Guanajuato in a heavy rain is like an adventure board game. It’s like you’re trying to get across this square and if you don’t roll at least a three you fall in the water trap and lose a turn. Meanwhile someone is spinning a little wheel that changes which alleys you can use this turn and which ones you can’t. If you get trapped in an alley you will be warped to a random fountain somewhere else in the city, which may get you closer to home or farther. Feeling lucky?

And this place is a desert. But it’s the rainy season right now. Usually that just means beautiful days with brief, late afternoon thunder showers. Monday, Tuesday and Wednesday while I was working all day, it was gorgeous outside. Thursday when I had errands to do: gorgeous. Today was my free day and crackoom! The storm of the century rolls out of nowhere just as I step out of the public market. Let’s do this, Quetzlcoatl!

You may remember that Guanajuato is a giant spaghetti-shaped mess of narrow, steeply slanted alleys, with staircases going up to mountaintop neighborhoods and steeper stairs descending into the city’s subterranean abyss. It’s serious Shoots & Ladders even on a good day. (Remember, the whole reason the city has a subterranean abyss was to try to stop waves of water rushing down the mountainsides from just blowing it all away once a year.) Now if you take a metric eff-load of water and toss it down the top of one of those streets, the result is that people downstairs better start making saving throws.

To put it in perspective, here’s my alley on a normal day: 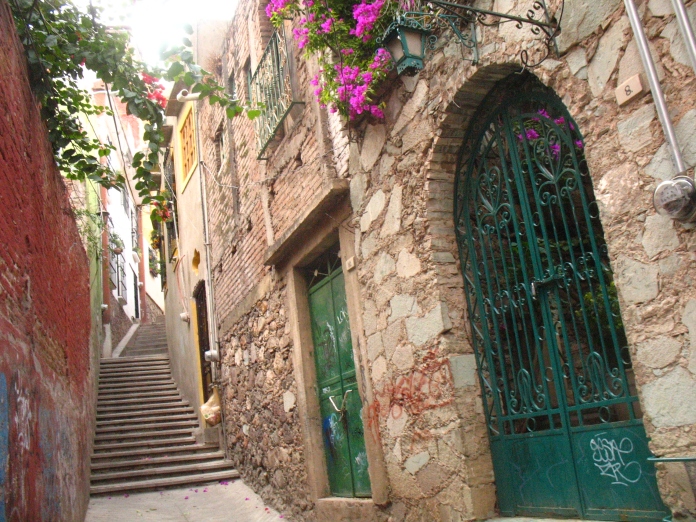 Here is it about an hour ago: 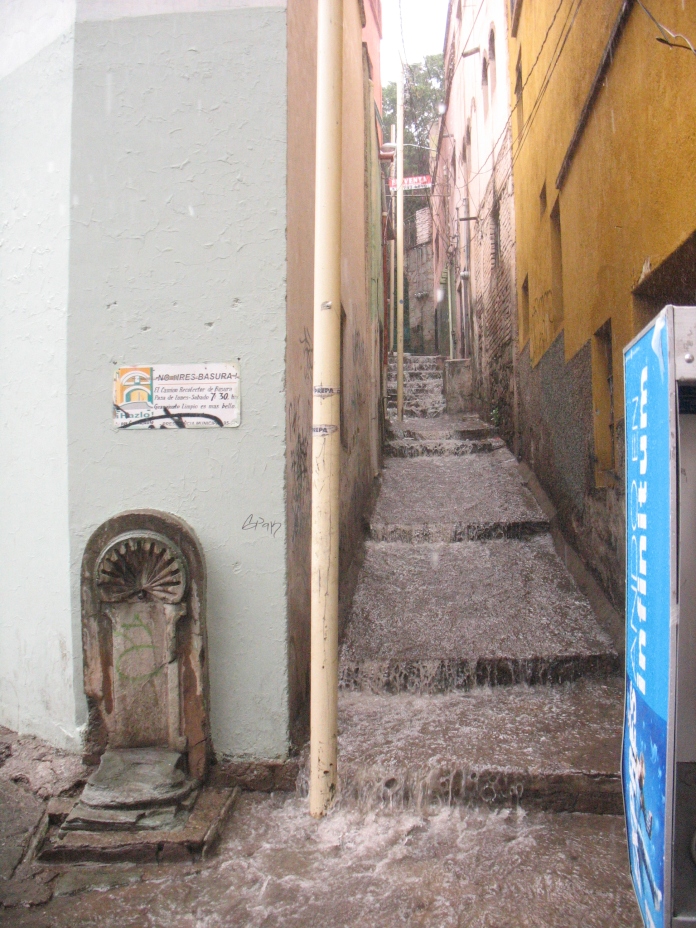 No problem, I thought. Because my neighborhood has a second entrance, which is much wider. The water shouldn’t be as deep or fast there because it’s spread out more. I’ll just go up the back way!

And my neighborhood isn’t even the worst. Check out the alleys I had to wade past just to get to my own Adventure Island challenge: 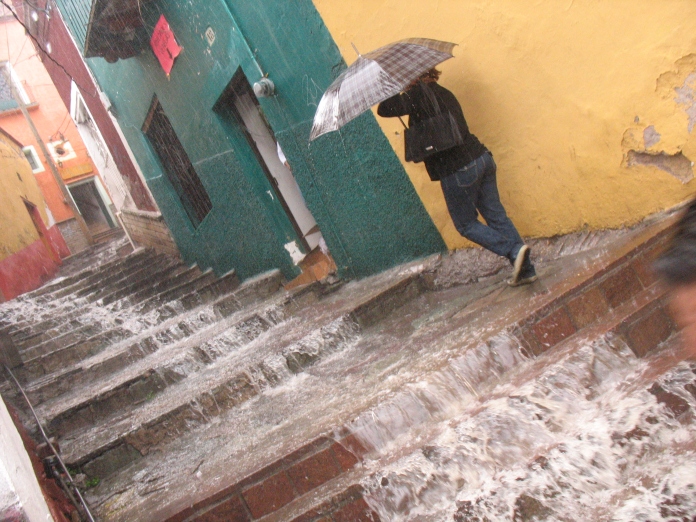 The difference between the people in the two pictures is that the lady in the second picture is either really, really desperate to get home or—like me—she doesn’t have a lick of sense in her head. The guy in the first picture knows the score: you use an umbrella and stay inside, because umbrellas won’t actually help you outside. (But yes, based on my experience in the fully roofed public market, you should still keep your umbrella ready when you’re inside.)

Umbrellas don’t help outside because the water comes from all available directions. The streets are no better than the callejones, because all the callejones dump into the streets. You know that thing in the movies where a car speeds through a puddle and shoots water all over the unlucky pedestrian (usually Meg Ryan)? I’ve gone thirty years and never had that happen. I lost my v-card like four times in 20 minutes. No one is slowing down in this city, even when they’re driving up a 45-degree trough with six inch water rushing through it at Niagara speeds.

Te amo Nayeli! If I was Nayeli I’d want my name in a more prominent location. Like try a little.

If you can stay on the sidewalks you’re at least not walking in the white water rapids (which are brown, not white), but narrow passages often require you to close your umbrella, and wide sidewalks are target ranges for roof drains. These drains don’t go down a vertical gutter like in the US, they are just spouts that stick about a meter out from a building and then let ‘er rip like Gulliver after too much coffee.

All of this was great fun, and I managed to keep a respectable portion of my middle-torso dry. More impressively, at no point was I swept off my feet. Although I was disappointed to discover that my cowboy boots are not waterproof at all. Who makes boots that aren’t waterproof?

Anyway, I think we can all agree that what really matters is I got a plaid umbrella:

…and that’s that new haircut you guys chose! What do you think?

16 thoughts on “When It Rains in Guanajuato (Photo Tale)”