Semo Cycle owners Tony and Jill in their shop.

The next day presented new problems. Semo Cycle was over 5 miles from my motel—and I had no wheels. I had to walk the bike the whole way.

With that came logistical challenges. You shouldn’t load a bike with weight when it has a flat, so the smart call was to leave my equipment in the motel and come all the way back after the repair. It was going to be a late start on the road.

Now it may sound easy to walk a bicycle, but it’s not. Not for more than a few hundred feet. The reason is that you’re off-center, pushing something on one side of you. It’s rough on your back and wears you out quickly. With a flat it’s even worse because now the bike is working against you. And the Giant is no ballerina even on a good day.

I underestimated how long the walk would take. Leaving by 8, I hoped to make Semo by 9:30 or so. It was almost 11 when I arrived. The worst part was just after starting. An SUV slowed down and honked. I looked over and who did I see—the man who gave shelter two nights ago! There I was, sweating, pushing a bike that clearly didn’t work, on the side of the road, and he… waved and kept driving. I tried to signal to him. I would gladly have paid him gas money if he could take me the five miles to the bike shop. But for whatever reason, he didn’t connect the dots that a cyclist walking their cycle is a bad sign. Off he went.

I did see some beautiful scenes on the walk. As soon as possible I turned off the main road and took a quieter one that went through the rural edge of town. I saw the fog burning off half-wild Southern fields and thickets. I got suspicious looks from occasional families. When I got back to the main road I even stopped for doughnuts and coffee (heck, why not).

This is also about the time I saw my first ever cotton field, ready for the pickin’. They’re beautiful: 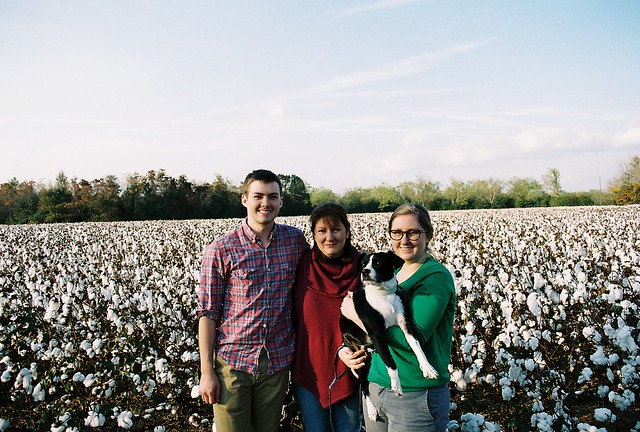 Thankfully Tony was ready for me. Once I got there he showed me the long-distance road tires which were indeed the best money can buy (and yet still startlingly affordable—I love bikes). They would carry me all the way to New Orleans.

We looked at the chewed up patch on my old tire, too. It hadn’t been that way when we rotated tires yesterday. Both of us had inspected the tires together, and I have to take the blame on this one. I was still inexperienced at changing tires, and I remember how roughly I would scrape the levers (tire changing tools) along the rubber. Little strips of rubber would always peel off when I changed a flat. I probably ripped open that weak spot myself when I changed my first flat the day before. I’ve learned to be a lot gentler.

Tony helped me out in other ways, too. After he heard how much I hated using my cheap air pump, he gave me a CO2 gun for free (!). With a few cheap CO2 cartridges, it wouldn’t get my tire all the way up to cruising PSI but it would inflate it enough to ride to the next gas station. That was amazing of him. I treasured that gun all the way across the Delta and vowed to pass it on for free to another cyclist once I could afford a quality air pump.

Last, he filled up my tubes with goo. This (I’ve learned) is a point of contention with cyclists. The idea is the goo is supposed to prevent flats by sealing tiny punctures. A lot of cyclists think it’s just a stupid waste of money that doesn’t really work. But I experienced a substantial change: before the goo, a puncture meant an explosive flat and immediate roadside repairs. That’s unpleasant (working in the hot sun) and causes unexpected delays far from help. After the goo, I noticed that I would finish a day with two functioning tires and then find a flat in the morning. Clearly I had gotten the flat the day before but the goo kept it to a gradual leak. This is infinitely better: it means you can do the repair in shade before even setting out, and if there’s any problem you’re likely near a hardware store if not a proper bike store.

I always want goo in my tires, and when a bike shop doesn’t offer it or hassles me about it, it really pisses me off. Bike store owners: get a pile of this stuff and offer it with all tire/tube changes. You can charge an extra dollar and you might save someone from a really crappy day.

Anyway, Tony at Semo Cycle and his wife were both amazing. They invited me to stick around for a week and join a big area bike tour, and warned me about some common hazards in the area. They’re really everything I want in a friendly local bike shop. If your trip ever takes you near Sikeston, stop at Semo Cycle and give these guys some business.

Finally the Giant was well and it was time to hit the road. Once again I wanted to head at least as far as Hayti, and given the late start I figured I’d get no farther than that. But that would put me in striking distance of Memphis the following day, where Couchsurfing hosts and a new city to explore awaited.

This is the part where my memory was foggy. Clearly I biked 5+ miles (not included in mileage) back to the motel, but then what? It makes absolutely no sense to do five more miles back out Semo Cycle way to take the country road, but I think that’s what I did. That sounds very much like me. I definitely don’t remember getting on the flippin’ Interstate with its cloverleafs, nor taking its frontage road, which zags back and forth. I already knew the pavement was reliable on rural Highway 61/62, and I believe I went out of my way to take it as far as I could. That would mean cruising past Semo Cycle one more time, which sounds familiar.

So that’s what the mileage and map will reflect.

Day 84 to be continued next time. Until then, you can check out other road logs.