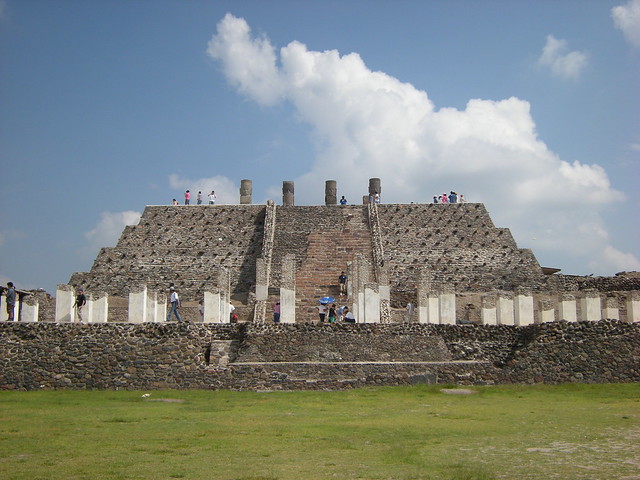 I promised that today I would have more information about the route for my cross-Mexico adventure. For those who don’t know, this is a bicycle expedition to cross all of Mexico powered only by the human body. It will start in November and anyone, regardless of skill level or experience, is welcome to come. I’m breaking it into small segments so you can do just a few days, or you can come for a longer stretch.

Planning the route has not been easy. In order to provide individual 4-7 day segments, I need to chart out every mile in advance. It try to end every segment in a larger town that has hotels, some culture and some cool things to see. That way we can spend a few days there, which gives some wiggle room for starting the next leg in case we’re running late.

That’s meant a lot of time on both the Spanish and English versions of Wikipedia researching the towns along the way. For example, one promising route ended in a town that turned out to be best known for its oil pipeline; I switched to a different route toward a little colonial gem instead. Anyone on this adventure will definitely experience the day to day life of rural Mexico, so adding a few tourist destinations seems like a nice balance.

Unfortunately, charting out these segments—and choosing dates for them—is a project that’s not yet finished. But I do have the overall route, broken into seven major legs, and wanted to show it to readers. If you’re even 20% interested in coming along, it’s time to start planning.

The seven legs are below, but first a note on safety. I planned this route using the advice of two native Mexicans, one of whom is a former security editor for a major news publication. I also drew on crime data from researchers at Stanford University and a variety of watch groups. These sources helped me avoid most high crime areas. Contrary to American perceptions, most of the violence in Mexico is concentrated along the northern border, as well as a few other hot spots. To complete the adventure requires crossing that border zone, but I was able to keep the rest of the trip away from major crime zones.

So with that said, here’s a rough map:

Each of these major branches has its own unique character:

This single three-day run is the section I suspect will get the least interest, but it’s also where I’d most value companions. We’ll start at dawn from the border city of Nuevo Laredo and cover a whopping 82 miles in one day. We’ll use a major Mexican highway with a wide paved shoulder, which is heavily policed by federal forces. We’ll check into a hotel in a small town before dark, rest up and leave the next morning for another 60 miles to Monterrey. Finally, on the third day we’ll cross a small mountain region to neighboring Saltillo, effectively getting us out of the border zone once and for all.

This section is harder to plan. While the crime rate drops to almost nothing after Saltillo, and the major highway is still well policed, now we’re in scrubby highland desert with very few towns. This will be a section where we’ll need to scope each village as we approach it and decide where we’re going to stay. Many nights we’ll camp in a town, which was surprisingly easy in Texas and which other cyclists tell me is both easy and safe in Mexico. (Fun fact: this probably means camping next to churches!) This section will have several 4-day legs and ultimately end at the tranquil colonial town of San Luís Potosi.

Typical bicycling days in this section will be an easy 30-45 miles, which will also be the pace for much of the rest of the trip.

This section crosses part of the Bajía, or Lowland, one of Mexico’s safest and most affluent regions. One leg will pass through San Miguel Allende, a beautiful silver mining town that has become a haven for expats and tourists.

So far we’ve been heading toward Mexico City, but I intend to avoid biking through it. I also want to skirt away from the surrounding cities which have high crime rates. Instead, we’ll stick to more rural areas and head east back into the highlands. Ultimately we’ll cross Mexico’s eastern mountain range at the city of Xalapa. This leg will have some serious uphill pedaling, but beautiful terrain and at least one town (Tula) with stunning pyramids and Toltec statues.

Road E: To the Gulf!

We’ll start with a long downhill run toward Heroica Veracruz and the Gulf shore, then a day at the beach town of Boca del Rio. After that will be a few days of short rides through buggy coastal marshes. The end of this leg will take us to Catemaco, Mexico’s City of Sorcerers perched beside a magic lake.

Note that this route is specifically charted to take us far south of the cartel activity concentrated further up the Gulf shore.

I’m not sure what to expect as far as scenery on this section. On the one hand, we’ll be hugging the shoreline and might get some great stops at beach towns. On the other hand, this isn’t a tourist region and we may see more refineries and offshore oil rigs than white sand and piña coladas. The terrain will be blisfully flat, however, making for relatively easy biking depending on the wind.

This is the last leg, the final run to victory! The Yucatán is my favorite region in Mexico for so many reasons. Beautiful terrain, ancient pyramids, hidden cenotes (underwater lakes), Mayan art and culture, and the best food in the entire nation. Our route will be mostly inland, crossing some deserts and skirting at least one national park and wildlife refuge. We’ll pass through the popular tourist city of Merida, bicycle right past the famous Chichén Itzá pyramids, and end in the peaceful colonial town of Valladolid.

I chose Valladolid because I have warm memories there and because it’s affordable compared to bigger tourist destinations. I plan to rent a home and spend several months writing. Of course, we should have a celebration first when we arrive, and beach cities like Cancún and Tulum are just a 1 hour bus ride, if you need some R&R after the long pedal.

I have interest from at least three people in joining for part or all of this journey. I hope to announce dates as soon as possible, but the journey will start in early November and take approximately two months. We’ll reach the Gulf around the beginning of December and likely be in the Yucatán for Christmas.

I’ll locate nearby airports for each leg so that arriving and joining us is as easy as it can be. But I don’t know what to plan unless I hear from those interested. So here’s what I need from you, dear readers: which of these segments sounds most attractive to you? Is there a part you can picture yourself doing? And who wants to brave the difficult Border section with me?

Of course, if you can’t cycle a leg, you could also meet up with us in one of our rest stop towns and just hang out for a few days. What do you think?