Back to road logs! Last time the black cloud over my head parted (after thoroughly dousing me with rain) and I experienced a new level of kindness on my Journey. This time, I put the difficulties behind me and try to race to Vicksburg on the promise of a comfortable bed. 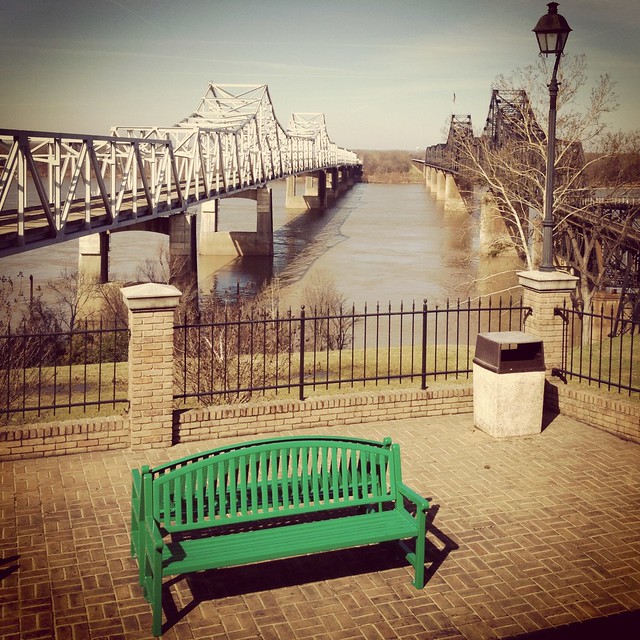 Since the previous 48 hours included head stroke, exhaustion, hypothermia, and little real rest, I had no problem sleeping on the stage in a church gymnasium. I did have a problem waking up, but there wasn’t much choice: Pastor Brian needed me out by 8:00 so I wouldn’t be in the way of church members arriving to start Sunday youth programs.

I woke up on time, groggy eyed, and raced to get things ready. But people arrived early. I could hear voices outside soon a volunteer was in the giant kitchen, prepping things. At first no one really paid attention to me; this is what you might call a “mega church” and I suppose not all the community members know each other. But they do know that loading up a bicycle with camping gear is not a common church activity, and soon they had questions. They were as friendly as you could possibly imagine—no one insinuated I was trespassing. And when I said I had the Pastor’s permission, it was clear that was all I needed. But I worried, suddenly, that my presence might raise questions Brian had hoped not to answer, or that I’d have to start refusing invites to attend service. I scrambled my bike out the door and hit the open road.

For a few minutes, anyway. This was an earlier start than I normally had, and I was famished. I located a Shoney’s in town and biked over to eat. I ordered the largest breakfast special they had, not worried about the piles of carbs before me given that I was burning about 6,000 calories a day. I ate staring out the window at the sky. Grey clouds raced on the north wind, evoking yesterday’s chills. But my heart was high. I’ll always remember that time: the elements seething outside, me me sipping cup after cup of coffee, the adventurer enjoying a small delight. For that moment I was totally free from fear. When I finally went outside, I stayed warm for hours.

That’s a good chunk of what I remember about the road to Vicksburg. I continued on the scenic River Road, and halfway through the day it merged onto the main highway. Eventually I crossed the Yazoo River and its Yazoo Pass, which made the name of the cafe back in Clarksdale make a lot more sense. My map app wanted me to follow Highway 61 all the way into town but, remembering freeway conditions near other larger cities, I planned my own course that involved rural roads once I got close.

I made poorer time than I expected,  but didn’t really care. The sun was low when I turned off 61 onto a disused side road. I was about to experience two things: truly mystical terrain and a new opportunity to get lost.

Mississippi is, in my opinion, one of the most beautiful states in our country. The terrain near Vicksburg–built on a bluff over the magnificent Mississippi–is hilly, almost mountainous. I would have believed that some of the vistas were from a lazy corner of Appalachia. Or, for that matter, a fantasy world: soon entire forests were covered with a blanket of choking vine, a solid rolling expanse of green. Mighty oaks rose like moss-covered rocks, smooth and branchless under their creepers. The cliffs and wore the same shroud. Mist drifted from these surroundings, huddling in the shady lows like a magic tide on the rise. I breathed the air and chanted to the local gods.

The local people were in less opulent straits. The landscape alone could have convinced me I was back in rural Thailand; the houses proved it. Tiny cabins housed large families, many cooking over an open fire outside. Brush or garbage fires burned as well, and smoke drifted across the highway. I waved as I passed. Little dark-skinned children watched me go by with curiosity, or yelled and pointed me out to their parents and grandparents, who waved back. I passed a time-beaten church closed up for the evening, and then the forested hillside dropped away and so did the homes. I found myself in open fields.

This nagged at my navigating instinct. Shouldn’t I be seeing more and bigger houses as I got closer to the city? But the road was winding and had many turns, and I decided to trust the directions I’d gotten from Google. I enjoyed the evening ride, knowing I would reach a house with a real bed and a real shower before sunset. I texted Carla, the host at that house, with an ETA less than an hour out. She told me they had another Couchsurfer as well, a girl from Germany, and that they were cooking a huge dinner. I’d be right on time.

But when the fields gave way to endless industrial structures—no cityscape on the horizon—I knew I’d done something wrong. Finally I pulled over and brought up the map again. I was on the prescribed route but, looking carefully, it led to the wrong destination. Some rural road had a name similar to the street where Carla lives, and Google had aimed me there instead of downtown Vicksburg.

I laughed. Like so many times on my Adventure, the moment when comfort is closest is exactly when one last obstacle reared its head. I could only shake my head at the fading Sun, who watched all this with barely a smirk, and laugh at myself.

Soon I’d routed the correct address (another hour away) and informed Carla, who was very understanding. But now I pedaled with a fire: I was hungry, and tired, and didn’t want to enter a city at nightfall.

I wondered if the families would think it was funny when I biked past a second time in the opposite direction, but my turnoff came before I reached many houses. One road led to another, I found my urban surroundings, and a single uphill chug took me into the heart off historic Vicksburg. It was dusk.

A little after downtown was the beautiful, aged street where Carla lived with her roommate Ryan. I had a final moment of uncertainty in the grey light, the spot where their address should be containing no clear house and no clear driveway, but wandering down a packed-earth alleyway landed me at their door. Their house perched just above the winding Mississippi. The sun’s last glow faded and Carla, Ryan, Katya and two puppies cheerfully received me.

I completely fell in love with Vicksburg over the course of just a few days. I’ll tell you all about it next time, and until then you can also check out my past road logs. You can also sign up to bike a leg with me.

4 thoughts on “The Road to Vicksburg”