Last time I rested and partied in Vicksburg. Now I take to the road once again, with more new friends to meet and more challenges to conquer.

Jimmy and me. Photo by André.

My new Vicksburg friends begged me to stay through another weekend, but now the clock was counting down. To keep my promise to meet two friends in New Orleans, I wanted to arrive the same day they would: October 17. I still had time to make it, but just barely. I’d spend at least one day going to Natchez, Mississippi; a second day to reach Baton Rouge, and potentially two more to hit the Big Easy. Factor in potential breakdowns and time was running out.

So Thursday morning I mounted up. I had heard of something up ahead called the Natchez Trace, an ancient highway that was, I was promised, blissfully free of traffic. The Trace started out as a Native American footpath shared by the European voyageurs in the frontier days. Once the Mississippi River became a major thoroughfare, so did the Trace. Crews from riverboats, who rode the current downstream herding their cargo as they went, had to walk back upstream in order to get a new gig aboard a new barge. (Apparently walking was cheaper than hiring horses, even with the longer road time). So they followed the well worn footpath from the river town of Natchez, MS up as far as Nashville.

Why the Trace goes to Nashville I can’t say. I presume these boat workers wanted to get another job as soon as they could, maybe at a town like Memphis. But the Trace’s route heads immediately away from the river, and by the time you reach Nashville you’ve a good 150 miles from the Mississippi. To me, it doesn’t add up.

What does make sense is how the Trace has been preserved and memorialized. The entirety of the trail is owned by the National Park Service and considered a historic site. While much of the original footpath still exists, a paved road was added as well—but it’s cleverly restricted. No commercial trucks can drive the Trace, and the speed limit is lower than a normal freeway. The result is that general traffic doesn’t use it, and the only vehicles you see are hatchbacks loaded up for family vacations and a few motorcyclists and bicycle groups.

At Vicksburg I was near the end of the Trace, and I planned to do about 35 miles on it, the second half of the day’s ride. First I took regular highways, having a little bit of a hard time between the occasional hills and the brutal Southern sun. By the time I reached Port Gibson, the town where I’d pick up the Trace, I already felt a little woozy. I started to worry that the glories of the Trace, like so many “easy” stretches before me, may have been exaggerated. I pounded cold water, bananas and trail mix in the shade at a gas station, double checked where to get on the Trace, and cautiously pedaled over.

A beautiful scenic route opened up before me. The traffic was, indeed, both sparse and respectful; the pavement was in remarkable condition; and instead of the usual gas stations and billboards the scenery was National Forest.

The new surroundings put me in a great mood. Emboldened by the low traffic I put in my ear buds and listened to music. I had never done this before on the bike, and I left one ear bud out (most of the time) to help stay aware of my surroundings. Digging into a trove of new music I had downloaded in Minnesota, I discovered Talvin Singh for the first time (Thank you, Urban!). If you’ve never biked through a forest with Talvin Singh in your ears, you’re missing a great experience. 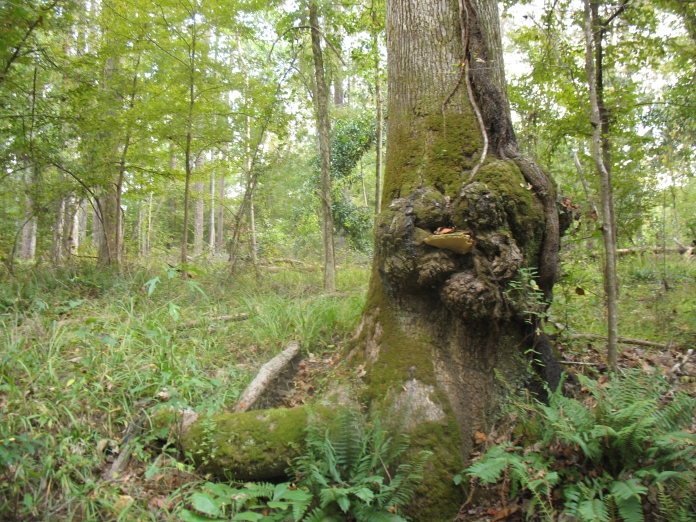 Small worlds off the Natchez Trace. Photo by André.

Parts of the Trace were shady, which finally broke my heat problem. At one point, even though I was running a bit later than hoped, I just couldn’t help it: I stopped, chained up the bike, and walked a footpath off the main road for nearly an hour. When I finally returned to the Trace and ponied up, I could see the remains of log cabins and other historic structures in glens off the side of the road.

As day became evening, I found myself wistful. This is what I wanted every biking day to be like. I had always pictured myself riding down cute country roads, enjoying the beautiful outdoors without a care in the world. Most bicycle days aren’t like that, but if you ride far enough you will find them.

This time I beat the sunset to my destination. I rolled into Natchez, Mississippi and regular roads just at the tail end of rush hour. I had found a host named Jimmy on Warm Showers, a site dedicated to bicyclists and those who are willing to provide them a spot to crash. It was my first time using this website and, incidentally, Jimmy’s first time acting as an official host.

Jimmy was a retired antique dealer. A few weeks earlier, a friend of his had run into two French cyclists (a couple) headed on a route similar to mine. He offered them his roof, and it was from them that he first heard of the Warm Showers website. He’d had such a good experience with those two that he listed himself as a host, just in time for me to find him.

Jimmy’s house was small but stunning. Part of a row of stucco-walled historic homes in the middle of the oldest part of Natchez, he had put his full antique dealer talents into appointing it with flawless Southern charm. Classical statues on marble topped tables, ancient oak canopy beds, and 150 year old paintings. It was hard to believe I was in a real house. The back garden, enclosed in a high wall, was his true passion, and it was immaculate. I said it looked like something you’d see in a magazine and Jimmy grinned. “It is,” he said, and handed me the issue where he was featured. 70.2 miles.

One thing Jimmy’s home lacked was wi-fi, but the Public Library was just two blocks away. I had planned to spend one rest day in Natchez to keep up with work and explore, and Jimmy and I hit it off so well that I knew it was the right choice. After a light breakfast together, I settled in at the library and set to work on my laptop.

I came back in the afternoon and Jimmy gave me a walking tour of the city’s historic homes. Most were owned by friends and neighbors, so he knew the whole backstory of all of them. He pointed out stunning architecture including a rare style of plantation home that he said had only one other surviving example (which I’d later see in New Orleans).

This one, in fact. Photo via Pam the RV traveler.

In the downtown area, he showed me where the steam boats docked and explained how there’d be a coach service waiting to bring passengers and their luggage up the small bluff to town. He pointed out one brick home above the bluff which once belonged to a free black landowner, “A former slave who owned plenty of slaves of his own.” I wasn’t unaware that there were once black slave owners, but seeing the house in person was jarring. How completely had slavery entrenched itself in the old economy, if even a former slave turned to it?

In the park we saw a memorial to the victims of the Rhythm Club Fire, an inferno that destroyed a local dance hall in 1940 and killed 209 people. The rafters had been decorated with Spanish moss sprayed with a flammable insecticide, and the windows boarded shut to keep out unpaid revelers. The back door was padlocked as well, so most people inside died of smoke inhalation or trampling when the fire swept in from somewhere near the front door. Most of those inside were African American.

According to Jimmy, many donations for the memorial and nearby museum had come from Chicago, because so many Natchez natives had moved there but still remembered the tragedy.

After this tour we drove to the grocery store, where Jimmy and I both tried to beat the other one to paying for pasta, bacon, goat cheese and fresh veggies. These were the ingredients I used to make a dinner for Jimmy and two of his friends, a retired judge and his wife. First I served a spinach salad with walnuts, cranberries and a warm dressing made from the bacon fat. Then I brought out a giant goat cheese bacon pasta with red peppers and caramelized onions. We had a red wine that paired nicely and, as I recall, a white after the meal was over.

I got my first lesson in Southern manners. At one point, I reached for the bottle and asked if I could refill the glass of the judge’s wife. She said “yes, please” so I did. Jimmy later told me, “I’m sure he won’t hold it against you because you didn’t know, but when she said yes the judge shook his head. People won’t always speak their minds here so you need to look for the little cues.”

This was also my first experience with a Louisiana accent, as Jimmy had spent most of his adult life in New Orleans. He called me “baby” a lot (he calls everyone “baby” a lot) which stuck out as unusual at first, but is a normal tick of Louisianans—and one I’ve now enthusiastically picked up, baby.

The evening with Jimmy and his friends is still a warm memory, and like so many new friends he asked me to stay longer. But this time I had to decline, beckoned forward by the final stretch. I slept well that night knowing it was with a heavy heart that I would get back on the road in the morning.

In Jimmy’s garden a hand-lettered sign proclaimed: Strive for Beauty and Humanity. I will, Jimmy.

Next time, the ride into Baton Rouge is more like a run through a war zone. Until then you can until then you can check out my past road logs or sign up to bike a leg with me. Likely start date of the Mexico trip: on or around November 6. Are you tempted yet?

2 thoughts on “Natchez and the Trace”