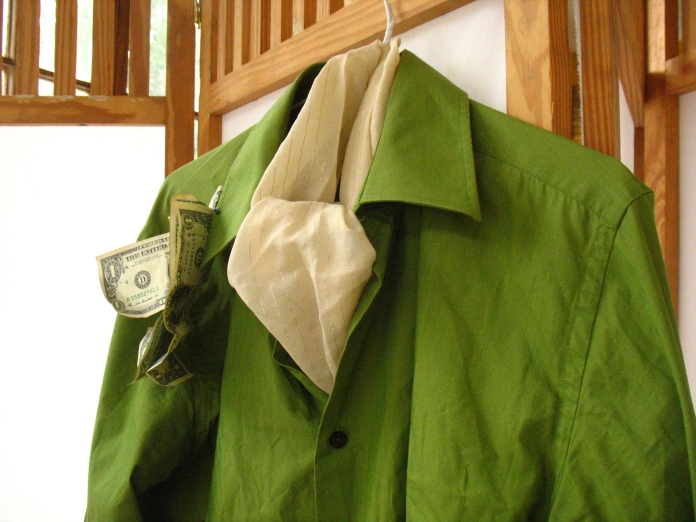 A few days ago I celebrated my birthday here in New Orleans. (For anyone who doesn’t know, I’m back here for downtime until the Fellowship of the Wheel takes off to bicycle Mexico.)

In New Orleans, the tradition on your birthday is for a friend to pin a $1 bill onto your lapel. Over the course of the day, other people will spot it and pin more $1 bills on you. Eventually this becomes a sort of cash corsage, which you can use to buy your birthday drinks.

I’ve had at least one friend—a transplant to New Orleans, like me—express dislike of this tradition. To them it feels a little like begging. I wasn’t sure what to think, but this year I had no choice: we had my birthday brunch at a local café, and when my friends sang Happy Birthday a woman from another table came over.

Honestly, I was ecstatic. It was the first time anybody’s ever done the corsage for me. And Yankee conservatism be damned: this is a local tradition. One of the unsung tragedies of Katrina is that tens of thousands of native New Orleanians left and never came back, and the city has not recovered from the loss of culture (even as newcomers come and take their place). I can’t change the fact that I’m not from here, but I can at least learn the traditions and pass them on.

But this was more than just a lesson in local culture. Wearing the corsage definitely does not feel like begging—in fact, it feels like magic. It marked me out as a birthday person, and total strangers came up to give me their well wishes. People broke into giant smiles. They came over, introduced themselves, and chatted under the guise of pinning a dollar on my shirt. A tourist even saw me and asked what it was all about, and I got to explain this tradition I’ve inherited.

Edit: A friend who is a lifelong New Orleanian just gave me some interesting history on this tradition. Originally the corsage was a black tradition and wasn’t really practiced by white New Orleanians. Now, my friend says, “it has been adopted by some New Dats like you!” New Dats are (mostly white) transplants to New Orleans.

There is something really special about this tradition. As kids, one of the best parts of a birthday is that it’s that rare time when you’re at the center of attention. As adults we don’t really get that—we have a little gathering with friends and some cake (my friends actually went well above and beyond that, but you know what I mean). But the corsage became an emblem that invited even strangers to come wish me well. It was like being in a Disney movie, where the whole world is singing for you.

Anyway, it was a good birthday, and one more gift from my beautiful New Orleans. Thank you to everyone who was there, and everyone who reads these words week after week. It’s an honor to be your rogue priest.

What are your favorite birthday traditions? Are there any you don’t like?

Want to give me the best birthday present ever? Spread the word about the Fellowship of the Wheel as far and wide as you can!

8 thoughts on “Birthday in New Orleans”