Since I managed to miss Photo Friday last week, this week there’s a double shot. First up:

That’s the view from the chapel of Guadalupe outside Real de Catorce. That white stuff beyond the mountains? That’s the top of endless miles of cloud covering the desert below.

Real de Catorce was formerly a silver mining town, and became a ghost town for many years. It’s also the gateway to the Wirikuta (Huiricuta), the sacred land of the Huichol. Each year they make a pilgrimage to this land, and to the sacred mountain far out in the desert, to collect the magic peyote cactus.

Here’s a different shot of the edge of the cloud bank as we ascended toward Real: 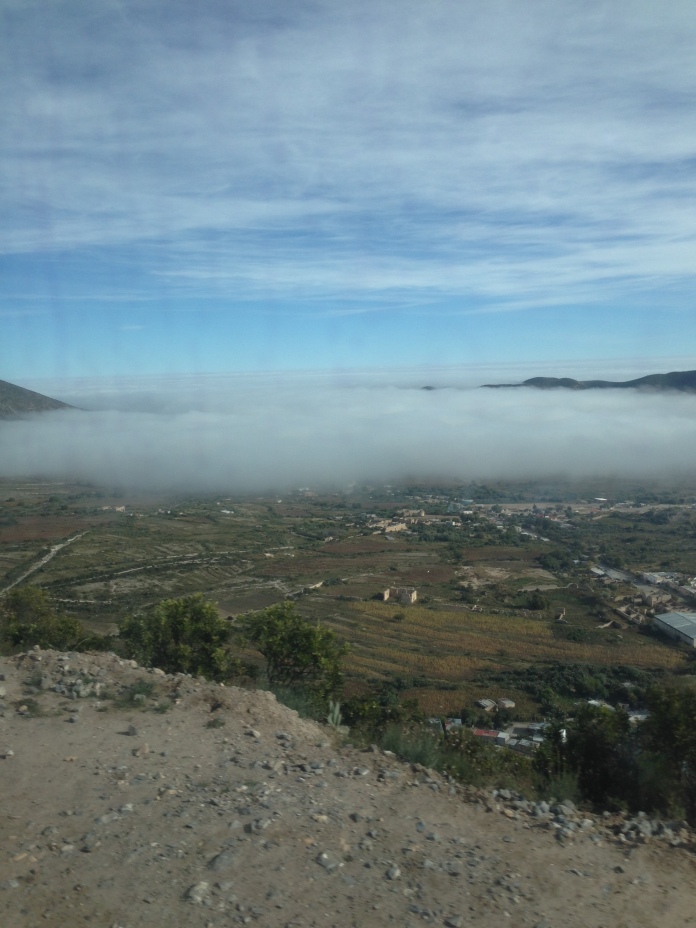 That shot, however, is on the outside of the cluster of mountains that surround the sacred land. You can see that the mist is thinner here and drifts freely. In the first shot, over the sacred desert, the thick cloud bank is essentially trapped by the mountains—it covered the whole desert the entire time we were there.

The other shot is from the town of Moctezuma (!), part of the “Corridor of Oases” that leads from the desert to the lush heartland of San Luis Potosí:

This is the main road into town, leading from a small parish church in an outlying village across the river to the centro and main parish church in town (I rode in via this street). The decorations are from a Catholic festival, in which people processed from the outlying church to the central one. When I asked a local which saint the festival and decorations were for, he scrunched his face.

He also pointed out that although Guadalupe’s feast day isn’t until December 12, people start celebrating it weeks earlier; one of the recent processions could be for her.

“If the saint days are only a few weeks apart, people just leave up the same decorations the whole time,” he added.

Here is the same street by full daylight. I love the shadows that the decorations make: