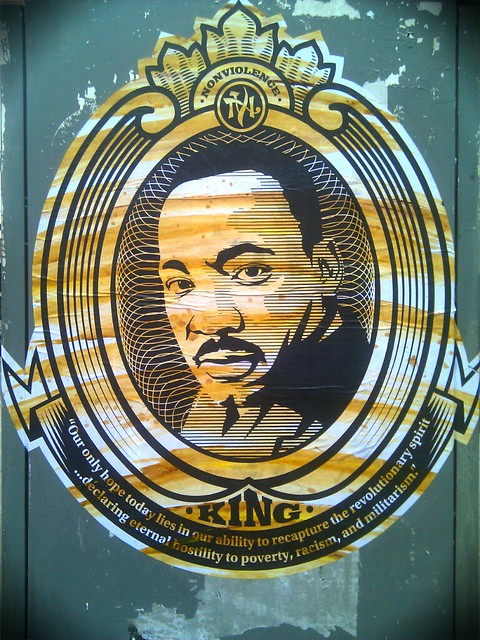 I’ve spent a lot of time recently talking about inspiration as a form of heroism. Everyone has someone who inspires them, and it’s okay to call that person your hero—even if it’s someone we wouldn’t normally think of as capital-H Heroic.

So how do these two concepts fit together?

I don’t think they’re as much at odds with each other as they first appear. For starters, it should be obvious that heroes who take risks for other people are incredibly inspiring. We can disagree all day on whether quarterback Drew Brees can really be called someone’s “hero,” but we all agree that MLK is a hero. You could view the difference between Brees and MLK in terms of risk: MLK risked (and ultimately lost) his life for the sake of his people, while Brees hasn’t done anything like that. But you could also view the difference in terms of how their examples affect us. Brees has achieved something impressive enough to inspire some people—athletes and football fans—but not impressive enough to inspire everybody. MLK, on the other hand, is an inspiration to virtually everyone who hears his story.

In other words, risk-taking heroes fit very comfortably into an inspiration theory of heroism. Taking selfless risks is one of the most inspiring things you can do.

Not All Heroes Are Equal

I think it’s also important to acknowledge that not all forms of heroism are equal. I’ve argued quite passionately that it’s not wrong to call rock stars heroes, or to call your grandma a hero. If they inspired you to strive to improve yourself in some way, then they fit the bill. But I absolutely do not believe that that kind of heroism is as heroic, or as important, as being prepared to take risks for what is right.

Even the most minor examples of selfless risk-taking heroism take tremendous moral steadfastness. A child standing up to a bully for his friend is taking a huge risk, and he’s doing something most of us would be afraid to do. We would keep our heads down and rationalize our passiveness after the fact. That brave child may not save hundreds of lives like the great heroes, or inspire millions like a pop star, but they tower above us morally. That is selfless, risk-taking heroism, and it’s powerful.

That kind of willingness to sacrifice is a trait that we need throughout life: to stand up to authority figures, to take action in a crisis, to be the first one to speak up when something isn’t right. The most important kind of hero is the kind who is willing to make those sacrifices every day.

So after you have your Gandhi’s and your MLK’s, after you have your lifesavers and your whistleblowers, somewhere farther down on the hero list you have your Lady Gagas, your Freddie Mercuries and your Drew Breeses. These people are heroes to the degree that they inspire someone, somewhere to strive to improve themselves. But they are lesser heroes, because the things that they inspire us to do—pursue our art or sport, work hard, be generous, be true to ourselves—do not involve making painful personal sacrifice for the people around us.

I’m not afraid to say that some heroes are more heroic than others. Nor do all inspiration heroes seem particularly heroic to me. But I understand that what inspires me may be very different from what inspires someone else; I understand that I can never know what effect a pop star, or an artist, or a coworker had on someone else. If that person’s example made you question yourself and try to live to a higher standard, then I accept that they’re your hero and I salute them.