Last time I swatted weevils in a string of valleys and reached the town of Huamantla. This time, I prepare for the final ascent to the mountain city of Xalapa—and the prettiest road I’ve seen.

Menu at the Aquellos Tiempos Cafe. Photo by Andre.

Free as my life may seem at times, I do still work and my clients always come first. Unexpected work cropped up and, since I was in a comfortable enough stopping place, I took two days to finish it before moving on. The best place to get wi-fi at the Hotel Azucena was in its 50’s style diner, where I got to know the staff while spending hours typing away. I did try out their chocolate milkshake and I have to say it was perfect. Although Mexico does fruit smoothies really, really well, milkshakes tend to disappoint (whether called licuado de chocolate, chocomilk, or malteada). By American standards they come out thin and soupy. But someone in the nostalgically named Cafe Aquellos Tiempos (“Those Times Cafe”) knew what they were doing. On the other hand, the first time I ordered a cappuccino it arrived as little more than steamed milk. I made a face and the waiter understood immediately, remaking it with a good sense of humor. For the rest of those two days every time I walked into the cafe the staff teased me about what kind of cappuccino I wanted.

Other than that my time in Huamantla was uneventful. It’s known as one of Mexico’s Pueblos Magicos (Magic Cities), just like Real de Catorce although for totally different reasons. It deserves the title, with a beautiful central jardín and lots of streets worth exploring. Its big claim to fame, however, is the annual Huamantla Fair. During the fair the streets are covered in elaborate “carpets” made of colored sawdust and flowers. They make more than four miles of these carpets the night before the big event, then march a religious procession over them.

One of the carpets at the Feria de Huamantla. Image by Rosalba Muñoz RomeroLia via Wikimedia Commons

That all happens in August, not December. The highlight of my stay was successfully requesting a beard trim in Spanish.

Xalapa was still a daunting 90 miles away, and I was determined to cover it all. Normally I’d break up this kind of run over a couple days, but the map showed no good towns to stop at. The geography didn’t help: I’d be climbing up over the last ridge of Mexico’s central mountains, then tipping over the peak for a race to the city. That last downhill run would be a thrill, if I could get that far.

I was in for a treat, however. This turned out to be the most beautiful road of my whole ride to date. An unfriendly wind gave way to a light cross breeze early on, and the terrain transformed continuously. The vast plains outside the city soon vanished and I entered a valley filled with a silver lake. The road was nothing more than a causeway, my bike and I a mere speck surrounded by mirror in all directions. On my left I could just spot an island with a rocky hill and its own stand of trees: the perfect place, I thought, for someone on a meditation retreat.

The valley lake and the causeway. Photo by André. 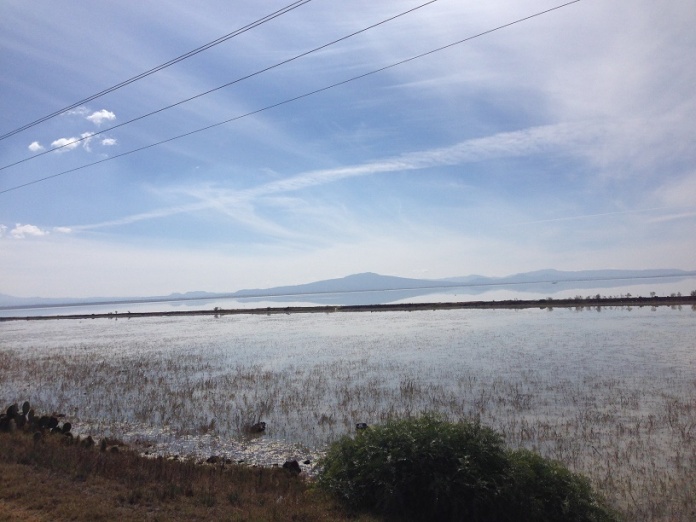 Marshes in the lake. Photo by André. 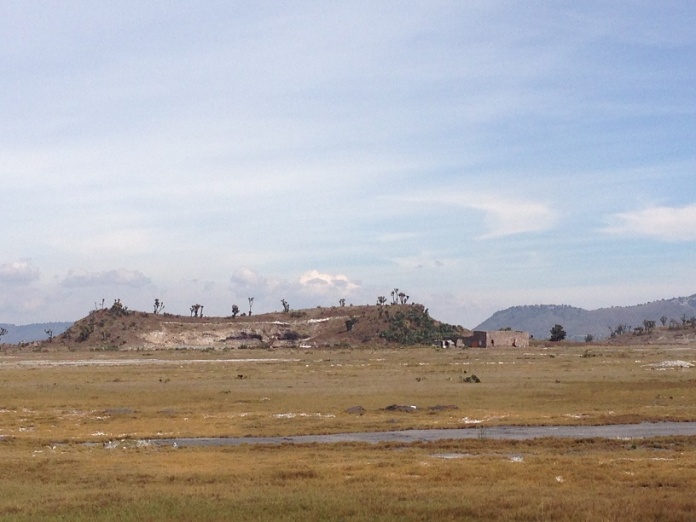 The outcropping in the marsh. Currently it’s used for grazing cattle. Photo by André.

Once across the lake I passed through a small town and turned onto a new highway, this one rising through chalky white hills covered in vicious green shrubs, the thorns of the desert swelled to tree-worthy proportions. Now and then, whenever they could find real soil, more hospitable vegetation filled in; lush tendrils hung down from secret ledges and draped the road above me.

Atop the white hills I stopped for a quick lunch. My venue was a simple gas station, but it was perched beside a vivid, sparkling, steel blue lake, still surrounded by bright white rock. It looked deep, cold and fresh, what they’d call a tarn in Scotland. (If Spanish has a word for it I have no idea what it is). A young guy stopped and chatted with me, showing me his own bike. I asked if he rides far and he named a town quite a ways off, and I nodded approvingly. It’s common to meet others with bikes, but not common that they enjoy riding long distances. He wished me well and cycled off.

Atop the white hills it was upland plains. Verdant cattle ranches tucked between round knobby rises in the land. The wind played behind me now, and stands of trees were less rare. I stopped under a line of them, ancient and now encroaching on the highway, for a water break.

I continued my new habit of listening to podcasts. I had finished Serial and gone through a fair number of Philosophy Bites episodes. I had high hopes for a new one, Modern Day Philosophers, which is comedians getting together to talk about famous philosophers and their ideas—but it was bad. It’s neither funny, nor particularly philosophic, and comes across more like the conversations you have on your couch when you’re stoned. Luckily I found Stuff You Should Know, one of the best podcasts yet.

Listening to these podcasts has really added something to my ride. I get to learn things and use my mind while I pedal. But I like cruising in silence, too. The time on the bike is meditative for me, and reflective; some of my best ideas come to me after hours of biking in solitude. So I’ve learned to strike a balance, using podcasts to feed my mind and using silence for the kind of discursive meditation that leads to new ideas. It’s consumption and creation in turns.

The last uphill miles were among the hardest. Lots of steep hills close together. But it also became completely wooded. Everything behind me was arid, blocked by mountains from the Gulf weather, but here I was in the cloud zone. Shady, humid and fragrant, I tried to imagine what it was like for the Aztecs or the Toltecs, ranging up from the desert, to stumble into a place so lush. No wonder they conquered it.

(Nowadays the forest hides ranches and small homes. Many are surrounded by mossy stone walls, and whole logs act as footbridges over ravines.)

I’ve developed a new habit. It’s hard to use CycleRoute.org, my topographic tool, on a mobile; instead I snap photos of my laptop screen the night before. As a result of this new practice I knew exactly when I had topped the last ridge, when I was at the height of the pass, 8,200 feet above the sea. Behind me was every highland struggle I had faced, and ahead was nothing but pure downhill. From here on there would be no more mountain ranges for the entire rest of Mexico. At that moment, just to my right was a shrine to Guadalupe. It reminded me of another mountain crossing that now seems so long ago.

The descent was incredible. The forest parted and, on the first curve, I could see nothing but grey clouds to the east. It was as if the entire world dropped off. Somewhere underneath that mist was the coast, the distant city of Veracruz, and the closer city of Xalapa. But here, it was as if I was running on the edge of the earth, and nothing but an endless fall awaited me.

Two roads descend to Xalapa, a straighter main highway and a more winding country road. I tried to stick to the country road, but they cross each other several times. Traffic, although light, often pushed close together on the narrow two-lane roads. On the uphills they nudged gently around me, and on the downhills they gave me space—which I needed, swinging into the lane on the curves and letting gravity do the work. I wondered, on my first big drop, why everybody was riding their brakes and going so slow. Then I realized they weren’t: I was moving as fast as traffic. 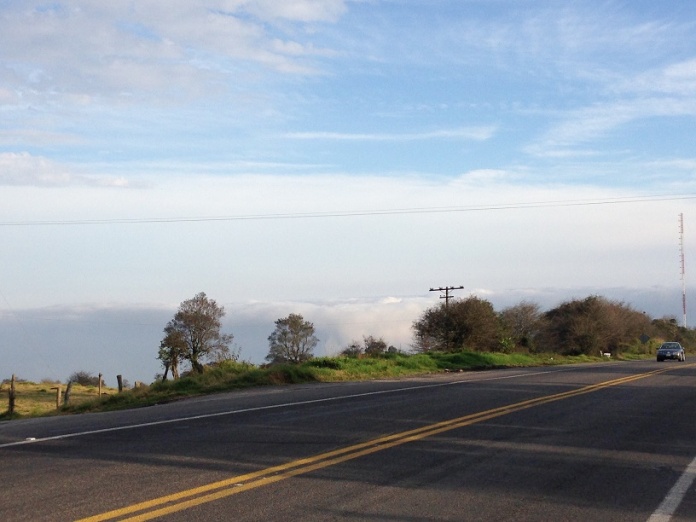 Clouds where the earth should be. Photo by André.

These roads passed through several small towns, one of which seemed like it would be a nice place to stop, but I was too in love with the roller coaster ahead. I kept on, momentum from the downhills carrying me easily over most of the occasional upward slopes. Happiness is a downhill bike ride.

At some point I jumped the track over to the wrong road. I’d intended to enter Xalapa from the west, a straight shot to the Centro. Instead I plunged in from the north, all the way across town. Xalapa is a stunning city: I found myself on long boulevards shaded by mighty tropical trees, woven with walking paths on all the medians. Some of these boulevards were slightly uphill, and it actually felt weird to having to pedal again. (Although my hands were grateful: I’d leaned into the wind, fingers poised on the brake handles, for so long that my wrists were numb.)

Crossing the city wasn’t bad but, as is often the case, the most adventurous stretch was saved for last. As I neared the central historic district I found myself on stone-paved streets packed bumper to bumper with traffic, each block steeper than the one before it. When the lights turned green the cars, buses and trucks rocketed forward in great surges of machinery. Your Rogue Priest moved from one hole to another in this mix, often occupying “lanes” in between columns of traffic. One local bus that scooted past me had spikes on its wheels, which struck me as a bit unfair. The traffic turned away one block before my street, leaving me to face the final descent alone: a potholed street so steep my body weight fell forward toward the handlebars. Keeping the brakes half clamped, I hunkered low in the saddle and made it.

The bottom was busy again. I turned left into a tunnel underneath a park and emerged from the other side on a perfectly normal, somewhat quiet downtown street. A few blocks later I was at my hotel for the night, the Salmones. 90.2 miles.

Next time I discover that Xalapa is more or less the city of my dreams—and I’ll take you on a tour to show you why. Until then, check out my other road logs or become a supporter.

2 thoughts on “The Prettiest Road in Mexico”