Last time I crashed in a love hotel with a bad knee and a worse case of food poisoning. Now it’s time to decide if I can go on—and what my other options are.

The Rogue Priest is nothing if not stubborn. My alarm went off early, and I awoke in my romantic-but-kinda-creepy hotel room.

I had some problems.

My stomach churned. The room spun. My forehead was on fire, and I went from overheated to chilled through in turns. All I could think of was the awful ground meat from the night before.

The knee wasn’t so great either. But maybe it wasn’t as bad as it was yesterday afternoon? Maybe the rest and ice had helped? I convinced myself of that. It was definitely better.

I checked the weather. My tail wind was still blowing, offering an “easy” ride to Villahermosa. And a short ride. Half a day tops—for real this time. I didn’t have much time; by evening the wind would shift. It was push on or get trapped.

So I allowed myself a little more sleep, then began assembling my things. The idea of breakfast grossed me out, so other than water and a few bites of candy, I left the stomach empty.

My riding clothes were soaked and covered in grit from yesterday’s ride. Many of my regular clothes were wet too, a memento of the failed lavandería in Coatza. But by bit I bagged everything and got it into the saddlebags, then loaded up the bike. The process was rough: every two minutes I had to stop, lay on the bed, and breathe. No coach would’ve given me the green light to go out on the field.

Finally it was time to go. I drank some more water and laid around one last time. Then I went downstairs, got on the creaky bicycle—his chain still covered in grit—and opened my personal garage bay.

The road lay before me.

I walked the Giant to the shoulder. The wind blew strong. This was the moment of truth; hopping on, I put weight on the first pedal with my good leg, then tried the next stroke with the injured one.

The bike glided to a stop. My feet touched the ground. I would not be leaving Cárdenas.

Instead I looped a few blocks away—limp-pedaling, of course—to the hotel I had meant to check into the night before, Hotel Madan. Even in those few blocks I got sprinkled on, rain from a sunny sky with giant clouds moving in. I was secretly grateful I would not be out on the road today; I had given it the best effort possible and could rest with a clear conscience.

Hotel Madan Cárdenas is a great place. Considering all the meh hotels I’ve been to, I was pleasantly surprised: large clean rooms, AC that works, wi-fi that works (!), a writing desk in every room, an on-site restaurant. It was great. Mostly though I just wanted to check in quickly and fall asleep, which did not stop the staff at the counter from showing me three separate rooms so I could choose which one I liked best.

Finally I was alone. Fever burning, I cranked up the AC, put on my driest and cleanest t-shirt, and climbed under the covers. On top of the 10 hours of sleep from the night before I now slept 7 more, getting up only to sip water.

In the evening I debated what my stomach could handle and found out that most of the simple things on the hotel menu—like hot oatmeal, or a waffle—were not actually available. I forget what I ended up with, but I ate it slowly and gratefully, iced my knee and went back to bed.

The wind shifted in the night and there was no longer a reason to hurry. I decided to rest as long as needed to get the knee back to 100 percent.

Cárdenas is a small city with not much going on, and it has a vaguely depressed and dangerous vibe to it. [Andre’s note: months later I would meet a friend whose wife is from Cárdenas. He said that after 28 years living in Mexico City, the only time he ever had a gun pointed at him was in this pleasant little burg.]

Here are a few highlights: 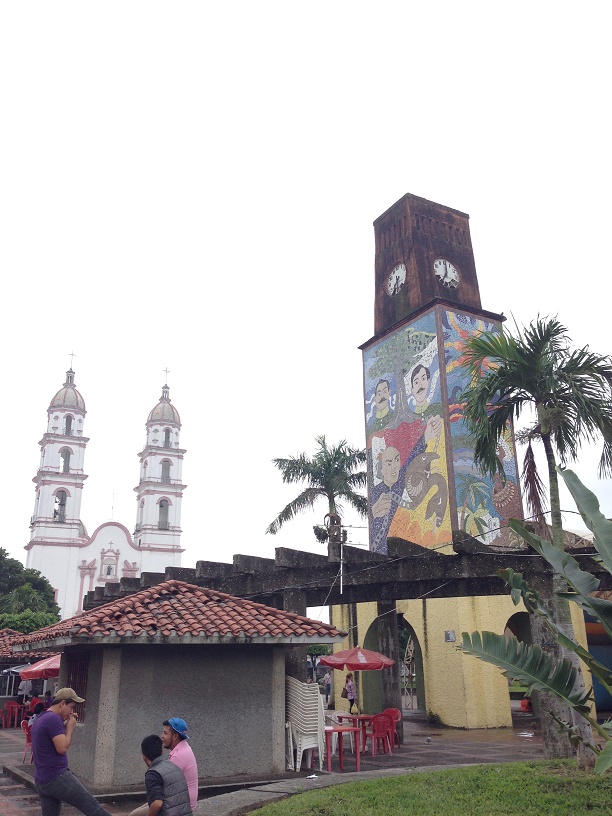 The centro in Cárdenas trying to look charming. Photo by Andre.

As my knee recovered I ranged farther and farther looking for anywhere fun in town, or even just a great restaurant. One day I stopped at an American chain pizza place alongside the freeway (I honestly forget if it was Pizza Hut or Domino’s). Next door was a KFC.

The food poisoning passed within 36 hours of the bad sope. The knee was much slower. Since Coatza I’d performed daily trigger point massage (thank you Amber!), taken anti-inflammatories and applied topical ointment. As it healed I also did light stretching. [Andre’s note: I now believe the problem was patellar tendinitis, which is not uncommon for cyclists.]

I wanted to get out of Cárdenas—it wasn’t the happiest place for me—but I refused to go until my knee was truly healed and ready for combat.

Wow, did it feel good to leave. I said goodbye to the hotel staff, who were like bffs by now. Every day they’d watch me walk outside and look at the weather, gauging the wind, and they’d ask

if I was staying till the rain passed. I said “Si, más o menos,” but of course I was really waiting to heal. Now they watched as I mounted up and prepared to bike out under a sky of black clouds.

And it really was—although as I recall, I never got a drop of rain that day.

I had already done some biking sans cargo around town, and the knee felt good. Now the bike was fully loaded. I was tender with my pedaling, and there was no pain.

The road rose to meet me. I began to crank out the 32 short miles to Villahermosa. 32 miles—a three hour ride, maybe two hours with that tail wind I’d missed. For someone who has the approximate endurance of drunken rodeo bull, it’s disconcerting to know I couldn’t make those couple of hours earlier.

The terrain was relatively flat. Out of Cárdenas I crossed a river that put me literally a stone’s throw from the state of Chiapas, a state I’ve still never been to. A couple hours later I rolled into the edge of Villahermosa.

I could tell right away that Villahermosa (“Beautiful Villa”) is a bit different from other Mexican cities. It seemed more spread out and maybe more modern, in the sense that most of it was built in the last century. It also has a variety of lakes, rivers and streams, something I’m not accustomed to seeing in a Mexican metropolis.

I worried the traffic entering the city would be unholy, but it was fine. I had done some research and chosen a hotel near the historic center, named Choco’s. (I’m unclear whether there is an eccentric Mexican woman named Choco, or if the hotel is actually owned by a chocobo.) I reached Choco’s on a healthy, intact knee and checked in. After a shower I went out in search of a sushi restaurant that appears on Google Maps but doesn’t actually exist. 32.2 miles.

Next time it’s giant stone heads, long tail raccoons and an explosive shower stall. Until then check out past road logs or become a supporter.