Previously on Rogue Priest, I hopped islands on a beach road to reach the city of Campeche. Now it’s time to go behind the giant medieval walls and explore this colonial port of call.

The hotel room was the best I’d had. Twelve foot ceilings, colonial tiles, a wrought iron grille on the windows, and a view of the sunny courtyard. It didn’t last long though: each day I had to check with the front desk and see if they needed to bump me, making way for a guest paying full price. I never did get kicked out, but after two nights they moved me to a smaller room. 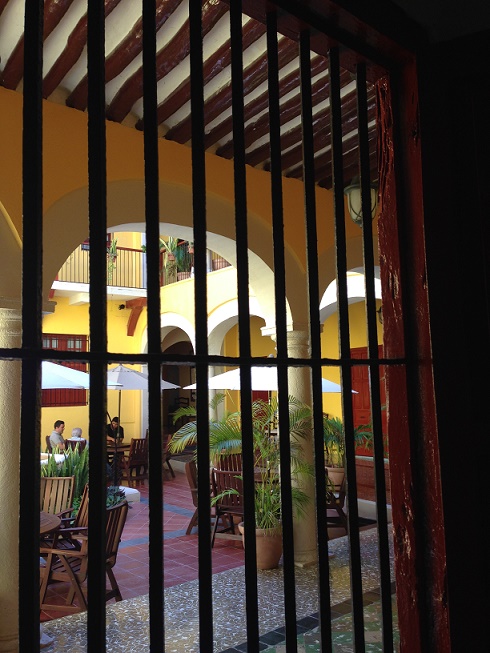 View from my hotel room (Thanks, Hotel Castelmar!). Photo by Andre.

In four days in Campeche I almost never left the old city. Wrapped up in its ancient walls, the old city is maybe five blocks by eight and simply simmers with history. All the streets are cobbled, all the houses are pastel, and every structure is from the colonial days. There is a beautiful central plaza and at least one pedestrian walking mall.

Three of the four sides of the old city still have the original walls, or at least some semblance of them. In places they have been restored and even enhanced with mosaics of tiny pebbles or shells. Elsewhere it’s exactly as time has left it: battered by cannon and rain. The back end of the old city has one of the original parapets complete with cannon embrasures and a mini pirate ship where tourists and local teenagers snap pictures of themselves. Instead of a hungry army of pirates, a public market lurks just outside.

This is seriously how you get to the market. Photo by Andre.

The pirate theme is not just a marketing tactic. Campeche was the first major port of the Yucatán, back when it was part of Yucatán and not the capital of its own separate state. The massive walls were built to repel raiders, and did their job well.

Yucatán’s main export was originally sugar. By the 1800s however rope, made from a plant called hennequin, was the bigger cash crop. That was a problem for Campeche: the hennequin plantations were far to the north, and soon opened their own port town, Sisal. (And yes, that’s why sisal twine is called that even today.)

The lost commerce was not Campeche’s only problem, however. Mérida, the capital of Yucatán, was determined to win a war against rebel Mayans, and they expected Campeche to help. The war lasted for fifty years. The rebels, sick of being serfs on plantations, successfully established their own independent Mayan nation deep in the jungle. They fought off Yucatecan/Mexican armies and marched on Mérida itself. The Mayans were just days from reconquering their entire ancestral homeland, when the first summer rains arrived and they went home to go plant corn.

(If you’re wondering how I know all this, you might enjoy this book. Thanks Alberto!)

The point is, the war was long, costly and divisive. Eventually Campeche split off from Yucatán which is why it has its own state even today. (The Mayan nation, on the other hand, was eventually destroyed.)

View of Campeche from atop the wall. Photo by Andre.

Climbing the Walls with Dr. Fun

It took me a little while to realize that you can actually go on top of the walls. I haven’t had great experiences with this—when I scaled a rampart in Thailand I found out it was a breeding ground for rats—but I rarely learn my lesson and quickly sniffed out the entrance. I’m glad I did. Campeche’s walls are reached by stairs at what was probably once a gatehouse and is now a museum. I entered its courtyard watched closely by a security guard and two women at a table. I expected an entrance fee but, unique in Mexico, they only wanted me to sign a guest book saying what country I’m from. Admission is free. 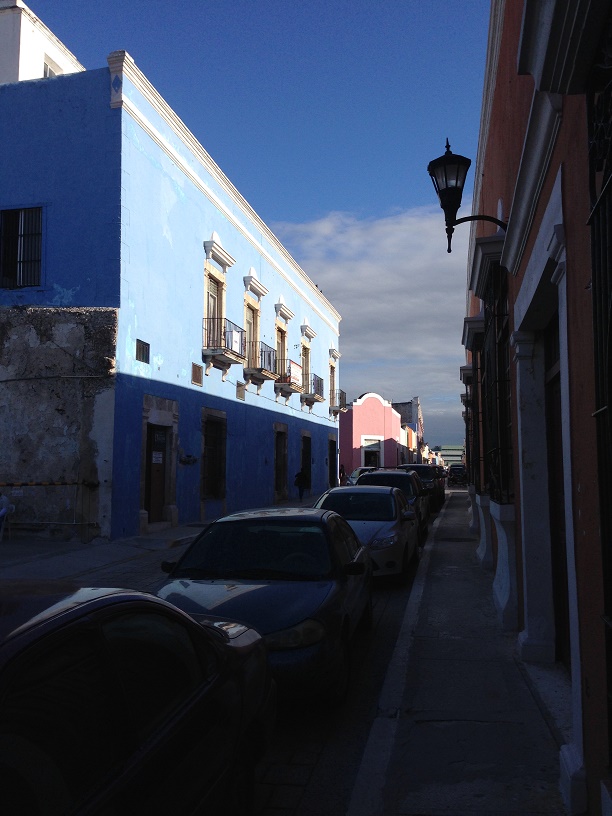 I went up on the walls several times during my stay. Only one section is accessible, but it’s great: a view of the Gulf, real battlements, even little cupulas for shade (it closes at sunset, which seems like a shame given what a great makeout place it would be).

The walls were never crowded, but I did meet one American couple there. When I mentioned my website, the man said, “Well Rogue Priest, I’m Dr. Fun.” Literally—he has a Ph.D. in Recreation Studies. They invited me to dinner at a seafood restaurant but I had a feeling it would be far too expensive and we’d get far too drunk. Our paths never crossed again.

Me with statues in Campeche.

You can tell a lot about a city by its approach to public art. The worst have none; the merely bad cities commission a few public pieces and vet the designs. The result is bland and often confounding. The best cities provide a theme or event and allow artists to interpret as they see fit. That’s how you get a city-wide sculpture garden, with something to discover around every corner.

Thus Campeche. Statues of human figures by a variety of artists were scattered through the streets and plazas and walking malls, always grabbing the eye and pulling you just a little farther along. Here’s an example: 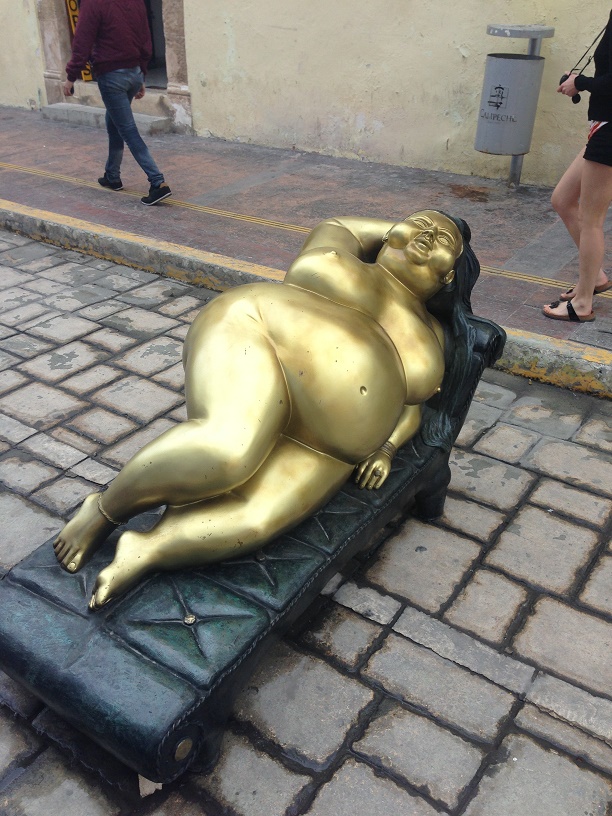 The cuisine was also amazing. I didn’t have to go on my usual pizza hunt to find an alternative to tacos, because seafood was cheap and abundant. I had fish pretty much every night, and great salads or smoothies from a veg place by day. There was even a cozy, artsy little coffee shop just two streets from the hotel.

Campeche is among the most beautiful cities in the Americas, but the tourists there are almost all Europeans. That surprises me. I know not all Americans spend their whole holiday on the beach; we’re a people who love to explore. But most of us never seem to get over to this side of the peninsula, which is a shame. Dr. Fun and his wife rented a car and made Campeche their first big stop on a tour of the little beach towns. I think that’s a great plan and would recommend it for anyone planning a flight into Cancún.

I found myself a little in love with Campeche, so much so that I started looking at apartment listings and house prices. It was hard to believe I was living so large, in such a breathtaking place, when just a week earlier I was trapped in a hotel with ripped knees and a fever.

Clearly I could have stayed in this city much longer, but the road was calling. My end point was just a few dasy’ ride away. So next time I’ll take to the road toward Mérida—and discover a very different kind of Mayan pueblo.

Until then, check out all my road logs or become a supporter.

2 thoughts on “The Sun-Drenched Streets of Campeche”