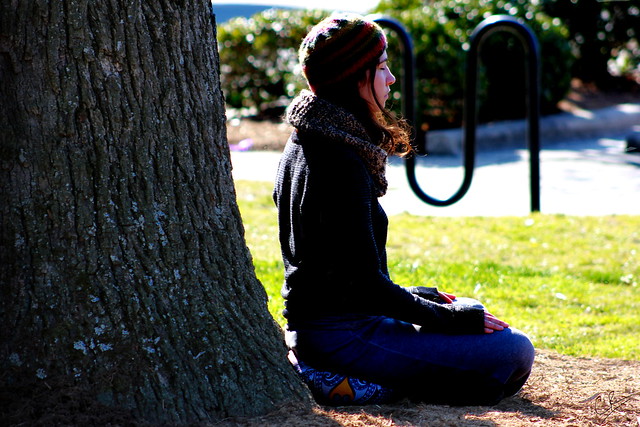 The course is produced by the Spiritual Naturalist Society, a humanist organization. They took feedback from myself and other testers, improved the course, and have now officially opened it to the public. This is my review of the course.

(Disclosure: I know one of the course designers personally. I do not receive compensation for this review nor for readers enrolling in the course.)

The course is a 4-week, online, mostly self-guided experience. I say “mostly” because you’re expected to complete certain modules each week. Within the week, you can go at your own pace and on your own schedule.

The face of the course is humanist author BT Newberg. While I know BT in real life, I’ve never seen him teach before and he does so with a gentle, confident delivery that makes him easy to absorb. It’s clear he’s someone who meditates extensively in his own life, and when he talks about the practices he’s speaking from experience.

The format has three parts:

Altogether, the total time commitment is about 3 hours/week.

This course is officially Spiritual Naturalism 101, an intro to naturalistic spirituality. The curriculum is ambitious—they really set out to give you a complete, hands on spiritual path. The course covers everything from understanding emotion to finding peace and fulfillment to facing death without an afterlife. It would have been easy for the course to go off the rails, but they kept it practical by anchoring each module in a specific practice.

If I had to name a main theme of the course, I would say “self mastery.” Several sections are dedicated to emotions, how they arise, and how to manage them. Clearly, awareness meditation is a major part of this, but so are lots of other, less well known practices. BT comes back often to the idea of “broadening,” or simply taking a moment to look at the larger context of a situation, in order to defuse stress, anxiety or negative emotions. That’s a shortcut a Buddhist wouldn’t take, which underscores that this course is all about what works and not just sticking to an age-old practice.

Not everything is about emotion. The course delves into what it means to live in a naturalistic universe. One module addresses suffering as a natural part of our world, and strategies for accepting that. Another deals with the anguish of knowing that death is final, and how to create meaning in a meaningless world. If you’re seeing a broad range of influences here, both Eastern and Western, you’re exactly right.

The most fascinating section dealt with myths, religion and mysticism. Maybe surprisingly, it didn’t disparage them. The SNS is very clear that it believes in none of this stuff—but it believes it can be useful anyway. BT describes his experience making offerings at the shrine of a deity he is 100% sure does not exist, and why that practice was valuable. He suggests that myth and mysticism fill a certain need in the human psyche, and can do their job even when taken as purely symbolic. “Dive deep” into the ocean of myth, he says, “And let naturalism be your lifeguard.”

Of course, this won’t appeal equally to every student. No section will—I found some highly valuable and others less so. But no section gets pushy. The course only asks you to understand the concepts and try each practice once; which ones you end up using on your own is an entirely your decision.

So far my comments have been mostly positive. I think it’s a good course. But are there downsides? Potentially:

All in all, I was very happy with the course. It’s a great tool for anyone who wants to explore their personal development and “spiritual” worldview without going down a faith-based path.

The first SNS 101 course begins Sunday, September 6th. Cost is $100, or $50 for SNS supporting members (you do not have to be a member to join). Space is limited to the first 10 students to sign up. Get more details or enroll here.

Next time I’ll get back to stories from Valladolid. If you’re hungry for stories now, check out my book.