We cracked my skull open and installed a few new parts.

Saturday, February 16 I was initiated into Vodou. I feel an obligation to write about my experience, because most people don’t. They say there’s no way to describe it. “You have to experience it for yourself.” But I do believe I can describe some of the feeling, the experience. I wish someone had described it to me long ago.

First, here is what I won’t say:

What Kind of Initiation?

This does not make me a priest of Vodou. The initiation I went through makes me a “hounsi bosale.” Hounsi is essentially a dedicated member of Vodou. Sometimes I see it used to mean apprentices or assistants of priests. In other usages it seems more like a term for a mystic or devotee who is not clergy. There is no analogous term in Christianity. It’s not like baptism, Christening or confirmation, although I erroneously compared it to those things before I underwent it myself.

Here are some questions I’ve been asked:

I understand why people say they couldn’t possibly describe what initiation is like. However, I do think it can be put in words—you just have to think about the words very hard. Many practitioners have a hard time framing it in a way that outsiders can understand, which is frustrating for both parties.

Vodou is primarily experiential. It will provoke moods, emotions, ideas and realizations in the practitioner and that’s really the point. It doesn’t matter what herbs the priest threw into the fire. That’s the stuff that’s easy to describe, but it doesn’t communicate the feeling.

Feelings are harder to explain but they’re the end result of Vodou practice. I can’t speak for anyone else’s experience but my own. Other initiates may feel something different. But I believe initiation will always be deep, emotional and outlook-changing. 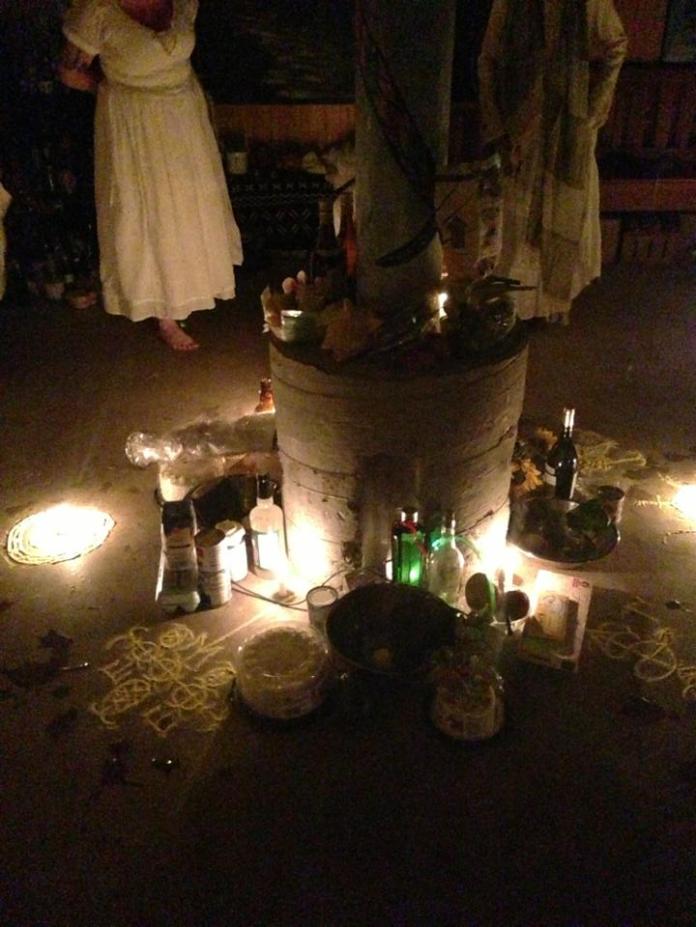 Here is why it can’t be compared to confirmation. Confirmation is as much external as it is internal. The person might feel a sense of spiritual elation or they might feel blasé. Maybe they’re only there because their family expects it. Much of the Confirmation is for the congregation: it shows everyone that this person has made a commitment. It strengthens a social structure. A 14 year old receiving confirmation may feel like the same person before and after; it’s their status with their group that has changed, not their sense of identity.

Vodou initiation is internal. Imagine if every person who took confirmation had an immediate vision of Christ bleeding on the cross, then felt the holistic ecstasy of all the angels singing. Imagine they suddenly blacked out and saw through the eyes of Jesus the day he forgave Peter.

Vodou has this down to a science. The ceremonies used in Vodou are a finely honed technology that can, reliably, provoke powerful consciousness shifts.

No one goes through initiation because it’s “expected” of them. If they’re there it’s a conscious, personal choice to be there. And, in the case of becoming Hounsi Bosale, their status with the group doesn’t really change. It didn’t make me a Vodou priest and it conferred no special powers or rights. I haven’t even made a promise of any kind. The entire point of initiation is to take a step in a personal odyssey. It is a rite of the individual, not of the congregation.

Both the expectations and the results of initiation are different than the rites of passage most of us went through growing up. It involves a dramatic internal shift.

Four of us initiated together. I had never met the other three. They are part of our House (congregation) but they live in another state. They can’t fly to New Orleans for ceremony very often.

I was told to arrive at 6 pm with all my offerings. They looked like they had been there for hours already. I was just showing up for another evening at the temple—something I do every week. For them it must have been a pilgrimage.

I wonder how they felt. I’ve been through initiations before. None were quite like the Vodou ceremony, but some were very intense. If we were soldiers waiting to jump out of an airplane, I was one who’d jumped before. It didn’t make this one less intimidating, it just meant I was calm about it.

We were sequestered together. I sat leaning against the wall with my eyes closed. I prayed to my oide, Lugh, and reaffirmed my devotion to him. Just because I am taking on a met tet doesn’t mean I don’t need my oide. There’s room in this adventurer for many gods.

That was all I really needed to do to prepare. I felt ready for anything. I made small talk with the other initiates, and made sure they were feeling happy and ready. Then I closed my eyes again and waited for my head to break.

To a spectator, the highlight of the ceremony is when each initiate personally calls their lwa in. This is something that’s usually done only by the priest. Imagine if at confirmation you were told to turn the wine into blood and you had to find the wherewithal to do it. Would you?

Lwa are called in by drawing their veve (diagram) on the ground in cornmeal, giving them offerings and invoking them. There’s a lot more to it but that’s the short version. Each of us had to be our own priest and manage this ourselves.

However, for a lot of reasons our lwa were already there. At least for me, mine was in my head since before we entered the main temple and he stayed there all night. I suspect it was the same for the other initiates.

I’m not going to describe all the details because I don’t know how much is secret. But I can say this:

Snakes in the Head

I had a spirit installed in my head that night.

It’s overpowering because there is a loss of control. I would move without willing myself to move. At one point I was asked a question and my mouth opened and someone else’s words came out. My lwa’s words. I was conscious and I heard them—I could even have stopped them if I wanted to. But I let them come out, and to hear them in my own voice was startling, almost worrying. It felt like something foreign in my head.

Likewise, at times I was completely lost in something. During the ceremony I was grinning and happy and acting with an energy and euphoria that are not part of my everyday persona. While dancing I felt lapses of control over my own body and I felt things very differently than normal. Some of this I had experienced at routine weekly ceremonies. But it was magnified.

With time, this overpowering aspect of the experience became normal—I learned to trust it. But even though it began to feel natural, it was no less overpowering. Aspects of my movements, words, thoughts, emotions remained out of my control or, more accurately, external to me. As if I was participating in my actions, but no longer as sole proprietor.

The overpowering aspect was there from the beginning, but the joyful aspect set in more gradually. I described already the euphoria during ceremony. This came and went in crescendos. When the main ceremony was over and we were led off for the rest of initiation, the four of us could hardly keep from laughing with excitement. Every one of us was in full contact with something that had previously been glimpsed only fleetingly in prayer.

I should note here that one does not choose one’s met tet at random. In some cases, you consult with your priest to decide it. Other times you may just know who it is. But always there is a connection between yourself and the lwa you choose. There are thousands and thousands of lwa, represented most commonly by about 20 main characters that every Vodouisant has heard of. They each correspond to a personality type that us living humans sometimes encounter. Your met tet is often the lwa with the personality most like your own, or the one who inspires you most. In the abstract this is like a list of archetypes. But a list of archetypes does not leap off the altar and into your brain, does not speak out loud, does not dance with you and share your cake. To meet your lwa is like seeing your mother or your soul mate when you thought they were dead.

So it’s joyful. But more than just the joy of knowing them, the experience itself is uplifting. All the changes to your body and mind are positive. And my lwa likes the other initiates’ lwa a lot. So the fact that they were there too, also in the flesh, right next to me meant this was like a reunion on top of it all.

In my case, the experience included a lot of visions. I don’t mean anything prophetic. But the visions can tell you a lot about what’s happening in your own life, and about yourself. Ultimately this leads to the profound aspect of initiation.

The profound comes after the fact. During my visions I was hardly thinking of their meaning at all; I was just in a state of bliss. The next morning, the weight of some of what I had seen, felt or realized crushed home. Again, this will be different for every person. But it comes with clarity. Tremendous, far-ranging clarity.

The effects of the ceremony continued long after it was over. The next day I went home and showered. I went out to lunch with friends. I got some work done. Even though I had returned to normal life, I experienced the following conditions the whole time:

All these conditions lingered long after the ceremony. Some of them are still in effect.

I don’t know what the long term effects will be. How many of these conditions will remain? How will they effect my journey? We’ll see. If you have questions about Vodou or the initiation process, please ask in the comments. I’ll try to answer although I’m not a Vodou priest.

Note: If you are interested in information regarding Vodou or initiation, I am not the person to ask—I am not a Vodou priest and I cannot speak on behalf of the House or our tradition. Instead, I recommend you contact La Source Ancienne Peristyle. They are great at answering questions.