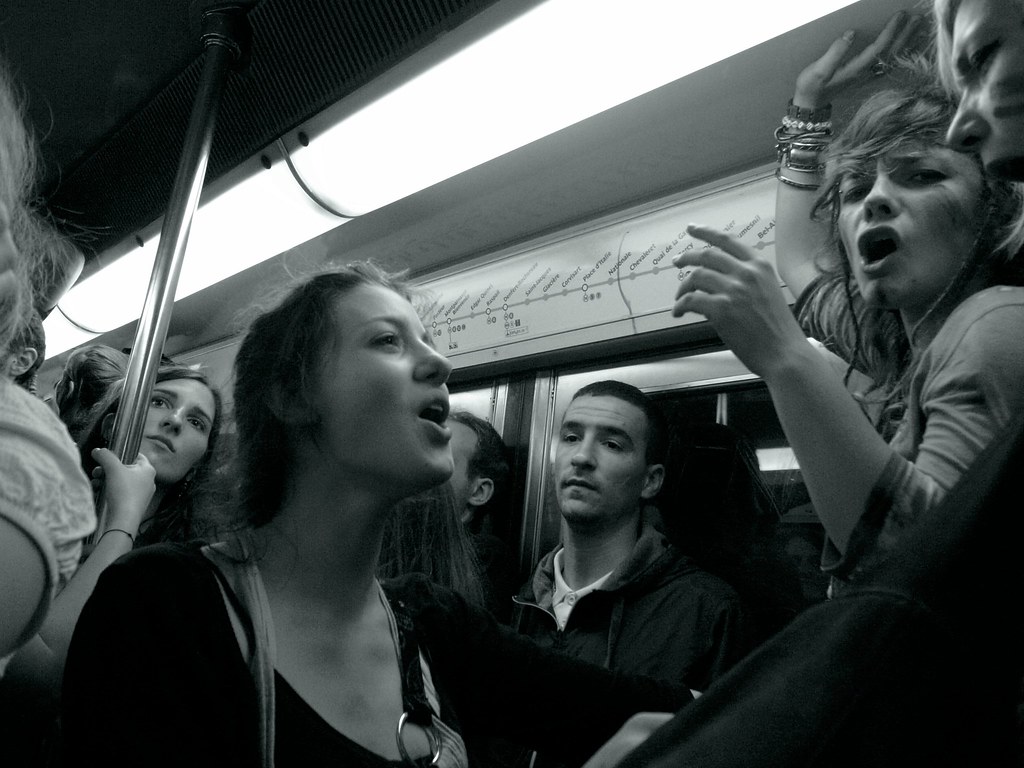 A minute passes. I decide to say something.

“Are you familiar with Noam Chomsky?”

The woman looks at me, but doesn’t immediately understand. It’s normal to strike up a conversation when you’re stuck waiting with someone. But she expected something like “Hot out, isn’t it?”

It sinks in, though.

“Noam Chomsky is a linguist,” I say anyway. “He studies language.”

“Noam Chomsky says that when two people are near each other, it’s almost impossible for them not to start talking to each other. He says that even if it’s strangers at a bus stop, we have this powerful urge to just start talking, just because we’re stuck together.”

The woman nods and says something very polite.

“But I disagree with Mr. Chomsky. I think some people have this trait and others don’t. I personally hate talking to strangers. Sometimes I even hate talking to my friends. I like them, I just don’t want to talk all the time. I’d rather pretend to be alone, and just think. Or read a book on my phone.”

She’s actually listening now, and she’s tilted her head and opened her mouth, but doesn’t seem quite sure what to say. I go on.

This theory really is one of Chomsky’s, although I’m sure that in the literature he has already accounted for the variation between introverts and extroverts. (Let’s not rehash that topic, internet.) The reason I bring it up is that it’s made me feel slightly better about one of my worst qualities.

One of my worst qualities is that I don’t listen to people, and I don’t like to talk to them either. Don’t get me wrong; if you’re a friend and we’re having a good conversation, and I’m making eye contact with you, my head is 90% in the game. I hear you. But if you can see my eyes twitching toward my computer screen, or a book, or the ingredients I’m chopping, or any other task I decided voluntarily to be involved in before you started talking to me against my will, it’s a sure bet that André is safe in his private inner life and the only person hearing you is my auto-responder.

If you are a stranger, the chance of getting the auto-responder is very, very high.

During these exchanges my number one goal is finding a way to exit the conversation: either an excuse to leave, or a body language cue that will get you to shut up. Really anything just so I can go back to spending my mental energy on what I wanted to spend it on, instead of using it to either filter out your attack or (worse) actually engage what you’re saying.

I consider this a worst quality of mine not just because it’s disgustingly rude, but also because it seems like a failing of my mind itself. Maybe a better meditater would be more present in all conversations, and a more spiritual, compassionate heart would truly listen to strangers.

Being “present” is, I suppose, a sign of a sharp mind. Caring is a sign of a good person.

So I’ve always secretly loathed this run-from-contact side of myself. But Noam Chomsky has given me a reason to reconsider.

Noam says (and seriously, you should read this interview) that language is not primarily designed to communicate. Language mostly helps us shape our thoughts, and talking to other people is really just kind of a side-job.

Which means that a lot of our out-loud talking is also not designed to communicate.

The example he gives is the bus stop. The two people just feel compelled to talk to (at) each other, just to fill up the time. Or, as Chomsky says, to solidify social relations. The small talk lets them establish that they are friendly, not creepy, and maybe it also establishes their relative importance to each other. (I made that up, by the way; I don’t know if that’s what Chomsky means by “solidify social relations.”) So they end up talking about the football score, the weather, where each person grew up. They shoot the shit.

“You don’t care, they don’t care, you’re not trying to transmit any information,” Chomsky says.

This is a great source of relief for me. Because, you see, I always thought that you do care when you’re prattling at me. I thought the NFL draft really meant a lot to you, or that you were hoping I would have an interesting response. That you were disappointed that I don’t like football and all your hopes for making a new friend just got dashed.

I thought you really cared.

(Or in the case of truly meaningless talk like the weather, I thought that you hoped I’d say something clever and we’d hit it off.)

I thought all this because I am not wired to talk immediately to anyone I happen to be near, so the reason why other people do it has always been a mystery to me.

But Chomsky says you don’t really care. You don’t care any more than I do what we’re talking about, or how I respond (unless I suddenly get really offensive, I suppose). You’re just saying things out loud because it makes you feel good.

Which means that really, when a stranger is making chit-chat, they are broadcasting garbage at me. My auto-responder is exactly the amount of my mental effort they deserve, because they’re just burping words near me for their own personal comfort. Not only am I not the asshole in this scenario, I’m sort of the victim.

Now I can’t deny that my own strange impulse—looking for any way to get out of the conversation, quickly—may be just as annoying to them as the word burping is to me. But at least now we’re in this together, both of us doing selfishly whatever we can for our own ease of comfort, with little regard for the other. I don’t really feel too bad about that.

With a friend it’s a little different. I can indulge a friend who needs to off-gas some words for their peace of mind. Maybe they had a bad day at work or an argument with their parents. But when I find myself daydreaming, I’m not really cheating them out of the great gift of my considered opinion. I’m giving them exactly what they want, which is someone who will listen while they put their thoughts “on paper” (paper being my ear) and organize what they think and feel about the situation. Chances are, any seeming clarity they get comes from that process of venting it all out—not from any advice I give.

Looking back over my life, my habit of not listening seems to always happen when the other person is broadcasting junk, when they aren’t really trying to transmit meaningful two-way communication. That tells me two things:

This is where I’d like your opinion (in a meaningful, two-way sense). The auto-responder may be just what someone needs, but what is the limit? When does it become just as rude as I always feared it was?