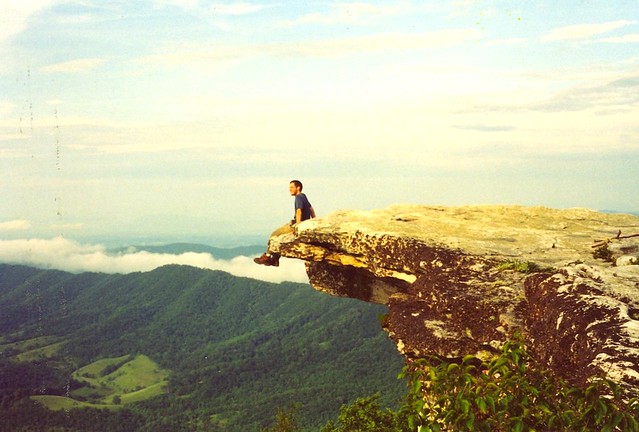 This is a good question.

Just to clear the air, I’m not Christian. From the way you phrase your question, with an emphasis capital-G God, I have to assume you’re coming from an Abrahamic background.

I’m a polytheist. We believe there are many faces of the divine—in other words, many deities. These deities did not create the universe nor do they rule over it. They live in it, just like you and me. They are the personalities of forces of nature (the wind, the sea, the sun, love, etc.). Relating to them is not necessary; they are not jealous gods. They were here long before us and they often watch us in silence. But if we choose to listen, we can hear them whisper their guidance.

I’m starting with that because it colors everything I believe about the role of religion and priesthood. Ultimately, priests are people who spend a lot of time building a close relationship with these beings. We learn about them and, hopefully, how to be like them.

For me, it’s easiest to find them in nature. But this isn’t true for everyone. All the natural forces are present in our cities and suburbs. Ultimately, we carry the gods inside ourselves, so we can hear them anywhere there is silence.

In my particular tradition, ceremonies are often held outdoors. Offerings are put outside. We sing to the sun when she rises and the moon when she first peeks out. There is poetry for the sea and the stars. Relating to nature is a powerful practice.

To that end, I think the way to improve any ministry or priesthood is:

I haven’t succeeded at all of this as a priest. I did teach many people to meditate, and helped a smaller number of people find themselves and their purpose in life. But I also found that it’s very, very hard to get people to make changes in their lives. There’s a lot of fear there.

I think that spending time in the wilderness is ultimately for a priest’s own enlightenment and well-being. The question is: when they learn whatever they’re going to learn from that, what are they bringing back to people who live a normal life? That’s what a priest needs to answer. We need to come out of retreat and get our hands in the soil.

Have a question? Ask me anything.

Lúnasa Days is about leaving home, taking a risk, and believing in magic.

In 2006 I learned to live in the wild. It was the most eye-opening experience I’ve ever had. People often ask what it was like, and I almost I can’t tell them. The only way to understand is to do it, and no one ever does it.

Or so I thought.

A Woman of Action

Last week I got an email from Clair. I’ve known Clair for years; at first she was the silent, thoughtful woman who attended events at our Temple. I began to talk with Clair and, bit by bit, discovered that she’s not exactly your average woman.

Clair has a commitment to living naturally. Not just buying organic, but actually changing her lifestyle. Last time I saw her she was living on an organic farm and learning how to work the land. She came to my going away party and gave me a jar of her own home-made drawing salve. It’s already proven its worth more than once by removing splinters and insect stings.

But somehow I still wasn’t expecting her email.

Clair announced that she’s going to Teaching Drum Outdoor School, the same wilderness school where I lived in 2006. Whereas I was there for less than a month, Clair will be going there for a year.

Teaching Drum has long offered a year-long wilderness program. Participants are taken to a remote section of wilderness. On Day 1 they make their own clothing from hides. They are shown how to make shelter, how to gather food and how to live as a small community on their own. In the winter they live in the snow; in the summer they live in the heat. Slowly over the year their food drops are reduced until they rely totally on their own hunting and gathering.

For many years, the yearling program was small: you can imagine that not many people are bold enough to try it, and many drop out before each year ends. But this year Clair and the Drum are taking it to an unprecedented level, with 40 people—adults and children—forming a true, working tribe in the woods.

[We will] learn how to live in the wilderness as a multi-generational clan. Many of the families and some singles are coming from overseas and the rest are from here in the States. We will be living in a community supporting and learning from each other what it truly means to be a human living in the circle of all our relations. We will also gain practical skills in fire making, shelter building and food gathering without modern equipment.

Clair’s group has started collecting for a scholarship to make sure no one is turned away. They seek to raise US $11,000 before May to underwrite the cost of attending this program and make it accessible to everyone.

I just made my donation, and I’d like to ask all Rogue Priest readers to consider donating too. Much of this blog is about having the determination to change your life, to transform yourself by embracing challenge. Clair is doing that in a remarkable way, and she and her tribe are making it a priority to help others do the same. They need your help.

There are two great ways you can support Clair’s yearlong group: